3 September 2013
Secretary-General Ban Ki-moon today released his report to the General Assembly on the work carried out by the United Nations over the past year, highlighting new priorities and challenges.

Secretary-General Ban Ki-moon today released his report to the General Assembly on the work carried out by the United Nations over the past year, highlighting new priorities and challenges.

In his annual report on the work of the Organization, Mr. Ban says that the UN is adapting to new realities, among them an unprecedented level of interconnectedness, as well as unemployment brought about by the global economic crisis, increasing inequality within and among States, and environmental degradation.

“Member States have recognized the need to adapt the Organization to these new realities, so that it can continue to make a positive difference in people’s lives,” Mr. Ban says in the report, adding that “the work of the United Nations over the past year clearly illustrates these long-term trends.”

The Secretary-General highlights various issues that the UN has been focusing on to address new challenges, including the shaping of a post-2015 development agenda, the need to tackle climate change, democratic transitions, methods to maintain peace and security such as mediation and peacekeeping, the promotion of human rights, disarmament and drug control, among others.

He points to the worldwide consultations on the post-2015 development framework as a way to bring in voices from all over the world and involve them in the drafting of an inclusive development agenda that builds on the eight anti-poverty targets known as the Millennium Development Goals (MDGs). He also notes that over the past year, natural disasters caused more than $100 billion in damage, giving “a sobering glimpse” of what the future will look like if the development agenda does not address the threat of climate change.

Regarding new methods to maintain peace, Mr. Ban notes the world body’s framework in the Democratic Republic of the Congo (DRC), which was established this year in a joint effort with the World Bank and all the countries in the region with the aim to address the root causes of repeated cycles of violence and deliver peace to people in DRC.

He also emphasizes that more complex threats required the UN to deploy peacekeeping missions in volatile, where hostilities were ongoing and political settlements had not yet been achieved. Such was the cased of the UN Multidimensional Integrated Stabilization Mission in Mali (MINUSMA), deployed in May to support a national political dialogue and electoral process, as well as the extension of State authority, to stabilize key population centres and protect civilians.

In the DRC, the Security Council authorized the establishment of an intervention brigade within the UN Organization Stabilization Mission (MONUSCO) which can conduct targeted offensive operations with the aim of neutralizing and disarming armed groups.

“In the Democratic Republic of the Congo, Mali and elsewhere, the core principles of peacekeeping will continue to apply on the understanding that impartiality does not mean neutrality in the face of atrocities, and that maintaining consent does not mean that spoilers can prevent United Nations missions from implementing their mandate,” Mr. Ban says. “Moreover, as United Nations peacekeeping deploys into new contexts, appropriate tools are needed to address new or intensified threats, including force enablers and multipliers, improved command and control and more effective information and analysis tools.”

However, Mr. Ban expresses disappointment on developments in Syria, saying that the deaths of more nearly 100,000 people and the displacement of millions are “a stain on our collective conscience and a grim reminder that the costs of war are measured not only in lives lost but in economies and infrastructures shattered, precious historical sites ruined, fragile social bonds sundered and an entire region destabilized with potentially lasting consequences.”

Mr. Ban stresses Member States must act more swiftly and decisively to avert and respond to violence, and added that the UN has “developed an action plan to respond more effectively to serious violations of human rights, drawing on the lessons of our failures in previous cases.”

Another area of priority throughout the year was the coordination of humanitarian assistance, as conflict displaced millions and natural disasters caused $138 billion in economic damage. The UN chief underlines that countries are still better at responding rather than preventing crises, and added that the Organization this year worked to bring resilience at the forefront through closer collaboration between humanitarian and development agencies to manage risks and address the underlying vulnerabilities.

Organized crime was another area of concern, affecting countries in West Africa, Latin America and Europe. Mr. Ban says the UN is helping countries address this threat through an integrated approach that combats drug-related crime, while also ensuring the need for health policies that ensure the protection of human rights.

The Secretary-General concludes that the UN would continue to adapt to a changing global environment and maximize the accountability of the Organization to Member States while minimizing administrative and supportive costs. 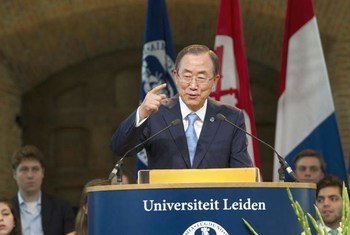 28 August 2013
Development, peace and security, and human rights are interdependent, mutually reinforcing dimensions of freedom, Secretary-General Ban Ki-moon today said at the historic Leiden University in the Netherlands urging world leaders to make sure no person is left behind.