Now is the time for accelerated, energized and concerted action on water and sanitation, Deputy Secretary-General Jan Eliasson today urged, calling for renewed cooperation on water management and access to adequate sanitation for the more than 2.5 billion people around the world without it.

In a keynote address to the World Water Week plenary session in Stockholm, Deputy Secretary-General Jan Eliasson said:“Dealing effectively with the water and sanitation crisis is fundamental to fighting disease and poverty.”

“In a world of population growth and pressures on water resources within and among nations, sound and fair water management is a huge task and a clear imperative for all of us,” Mr. Eliasson added.

He urged the hundreds of delegates gathered for the session entitled “Building partnerships for Sanitation and Water for All” to work towards sustainable solutions and measures among actors, including national governments, local administrations, development partners, international organizations, the private sector, the research and science community and civil society.

Water and sanitation are included in the eight anti-poverty targets known as the Millennium Development Goals (MDGs), which world leaders agreed to meet by the end of 2015.

The deputy noted last year's announcement that the world had reached the target for access to improved sources of water, but water quality to a large degree still fails to meet basic UN World Health Organization (WHO) standards.

Roughly 80 per cent of global wastewater from human settlements or industrial sources is discharged untreated, contaminating oceans, lakes and rivers.

Inadequate water supply and sanitation around the world lead to an economic loss of $260 billion in health costs and diminished work productivity, WHO reported. Meanwhile, meeting the MDG target on water and sanitation amount to $60 billion annually, according to studies Mr. Eliasson cited.

Sanitation is the most lagging of the MDGs. Meeting the target would involve reducing the proportion of people without access to sanitation from more than half to 25 per cent by 2015.

“We must continue to break taboos. As was the case for the word 'toilets' a few years ago, it is time to incorporate 'open defecation' in the diplomatic discourse today,” Mr. Eliasson urged.

Currently, one out of every four people in the least developed countries defecates in the open. Ending the practice could, for instance, lead to a 36 per cent reduction in diarrhoea, the deputy UN chief noted, and enhance the personal safety of women and girls who risk sexual assaults when venturing from their homes to isolated places for basic needs.

Open defecation is part of the “Call to Action” that Mr. Eliasson launched in March on behalf of Secretary-General Ban Ki-moon. It aims to improve hygiene, change social norms, better managing human waste and waste-water, and completely eliminate the practice of open defecation by 2025. The General Assembly furthered that aim last month, declaring 19 November as World Toilet Day.

In its latest report, the SWA partnership said that political leadership and concrete action have led to good progress on creating universal and sustainable access to decent sanitation and drinking water, but additional efforts are needed.

High-level members of the group are due to meet again next April, in a meeting led by the UN Children's Fund (UNICEF) and the World Bank.

Turning to his experiences in Darfur, Sudan, where Mr. Eliasson had been a Special Envoy of the Secretary-General, the UN deputy chief cautioned that water scarcity is an increasing reason for conflict.

“I have seen it in Darfur where poisoning of water wells was a way for forcing people to leave their villages for the overcrowded camps,” he noted, as well as in strained relations between States related to cross-border river and waterways management, agriculture and energy.

“If competition for resources turns into open conflict, invariably all sides, all involved, will suffer,” Mr. Eliasson said. “Our aim must be to make scarce resources, in particular water, a reason for cooperation rather than conflict.” 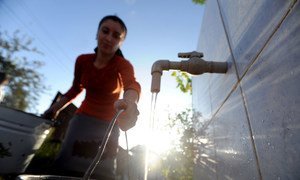 Political will key to ensuring water and sanitation for all, says UN-backed report

Political leadership and concrete action have led to good progress on creating universal and sustainable access to decent sanitation and drinking water, but additional efforts are needed to fulfil commitments by the 2014 deadline, a United Nations-backed partnership reported today.