2 September 2013
The United Nations Special Envoy for Africa's Great Lake's region is in the Democratic Republic of the Congo (DRC) to start a regional tour with envoys from the African Union, European Union and the United States to bolster diplomatic efforts for peace.

Mary Robinson's visit comes amid renewed intense fighting in the eastern DRC where over the past year, the M23, along with other armed groups, has clashed repeatedly with the DRC national forces (FARDC).

“I urge all parties concerned to immediately stop military confrontations in the eastern Democratic Republic of the Congo and work to rebuild trust in peace efforts,” the Special Envoy said at her arrival in the capital, Kinshasa, on Sunday.

“What the DRC and the region need is peace, stability and economic development. This can only be achieved by tackling the root causes of the conflict through a comprehensive political process,” Mrs. Robinson stressed.

The envoy is accompanied by Martin Kobler, the new Special Representative of the Secretary-General for the DRC and head of the UN mission there (MONUSCO).

Prior to the start of the joint regional tour, she and Mr. Kobler are meeting with UN partners in the DRC, and travelling to Goma to “express solidarity with the civilian population and MONUSCO,” according to Mrs. Robinson's office.

During the four-day visit, scheduled to start on Wednesday, Mrs. Robinson and Mr. Kobler will speak with senior government officials and representatives of local authorities, the international community and civil society in the DRC, Uganda and Rwanda.

The goal of the trip is to discourage further hostilities and to energize political efforts for peace in the region, including the so-called Kampala talks held under the auspices of the Chairperson of the International Conference for the Great Lakes Region (ICGLR), Ugandan President Yoweri Museveni.

While in Kampala on 5 September, Mrs. Robinson and the envoys will attend an extraordinary session of the IGCLR focused on the crisis in eastern DRC.

According to Mrs. Robinson's office, they will stress the urgency of steps forward in the implementation of the 11-nation Peace, Security and Cooperation Framework for the DRC and the region signed earlier this year under UN auspices as a comprehensive approach to sustainable peace in the region.

Mrs. Robinson had dubbed the accord a “framework of hope” and has repeatedly said that there is a renewed opportunity in eastern DRC and the Great Lakes to address the underlying causes of the conflict and stop the violence for good.

Secretary-General Ban Ki-moon on Friday said he was “deeply concerned” about the escalating violence and in particular by the indiscriminate shelling by the armed group M23 which caused deaths, injuries and damage among the civilian population in the eastern provinces as well as the immediate border area in Rwanda. A UN peacekeeper also died in one of the attacks.

In the past year, the fighting has displaced more than 100,000 people, exacerbating an ongoing humanitarian crisis in the region which includes 2.6 million internally displaced people (IDPs) and 6.4 million in need of food and emergency aid. 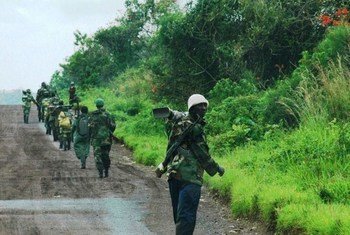 30 August 2013
Secretary-General Ban Ki-moon today condemned the latest bout of violence in the eastern Democratic Republic of the Congo (DRC) and called on all parties to engage in the political process that aims to address the causes of the conflict.