Mr. Velásquez is a former auxiliary magistrate of Colombia's Supreme Court, where he coordinated high-profile investigations into links between paramilitary groups and public officials.

He also has extensive prosecutorial and investigative experience in Colombia's Attorney General's Office and as Regional Director of the Public Prosecutor's office covering the Department of Antioquia.

Mr. Velásquez succeeds outgoing Commissioner Francisco Dall'Anese of Costa Rica, who served at the helm of the International Commission against Impunity in Guatemala (CICIG) for three years, stepping down by the end of his term on 4 September.

In a statement released from his spokesperson, Mr. Ban thanked Mr. Dall'Anese for his “deep commitment to the fight against impunity and efforts to strengthen Guatemala's justice institutions”.

The United Nations and the Guatemalan Government set up CICIG in 2006 as an independent body to support the public prosecutors' office, the national civilian police and other institutions to investigate a limited number of sensitive and difficult cases regarding illegal security groups and clandestine security organizations and also dismantle them.

Based in Guatemala City, the capital, since it began operations in early 2008, CICIG seeks to bolster the rule of law and is permitted by its mandate to conduct independent investigations and help authorities bring representative cases to trial in national courts. 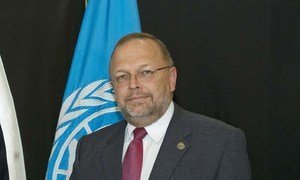 Secretary-General Ban Ki-moon has voiced his deep appreciation for dedication and efforts of Francisco Dall'Anese, who has announced that he will step down as the head of the United Nations-backed commission charged with dismantling illegal armed groups and tackling impunity in Guatemala.