WFP/Abeer Etefa
WFP is providing food assistance to Syrians who fled to Kawrgosk in Iraq.
30 August 2013

As tensions continue to ratchet up regarding the crisis in Syria, United Nations agencies today reiterated their commitment to continue providing emergency relief for Syrians inside the country, as well as for displaced persons, despite facing various security challenges.

In a briefing to reporters in Geneva, officials from the World Food Programme (WFP), the Office of the UN High Commissioner for Refugees (UNHCR), World Health Organization (WHO) and UN Children’s Fund (UNICEF) all said they would continue to carry out their operations and deliver basic supplies and services to those affected by the conflict.

UNICEF spokesperson Patrick McCormick said that despite the rise in tension the agency and its partners were on the ground delivering essential services for children and their families, and would continue their efforts to meet existing and new needs.

Adrian Edwards, spokesman for the UNHCR said that the agency had permanent contingency plans for large numbers of displaced people.

There are currently some 1,000 UN national and international staff inside Syria. 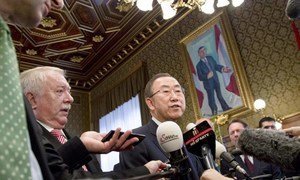 Secretary-General Ban Ki-moon is cutting short his official visit to Austria to return to New York in preparation for a briefing from the United Nations chemical weapons inspection team which is due to wrap up its work in Syria this weekend.