As the United Nations General Assembly gathered to review the efforts underway to revitalize its work, the body’s President challenged Member States to ensure that the ongoing reforms positioned the Assembly to play a leading role in 21st century global governance.

“We should aim to further empower the General Assembly, by ensuring the best possible use is made of its broad prerogatives, as provided by the UN Charter,” said Vuk Jeremic addressing a meeting of to approve the report of its Ad Hoc Working Group on the Revitalization of the Work of the General Assembly.

The Assembly decided to establish, at its upcoming 68th session an ad hoc Working Group to continue the work of the current panel.

The revitalization process aims to enhance the role, authority, effectiveness and efficiency of the Assembly, which representing all 193 Member States, is the main deliberative body of the UN and one of its six principal organs. The work of the Organization year-round derives largely from the mandates given by the Assembly.

“Revitalization holds the key to enabling this institution to set the agenda for a world in the midst of a profound strategic and environmental transformation, as the complex challenges we now face cannot be solved in isolation to one another,” Mr. Jeremic said.

nd environmental transformation, as the complex challenges we now face cannot be solved in isolation to one another,” Mr. Jeremic said.

He reminded delegations that a little over a year ago, world leaders at the UN Conference on Sustainable Development (Rio+20) tasked the Assembly with the primary responsibility for conceptualizing a universal transition to sustainability.

“Whether it succeeds or fails will represent, in my view, the strategic litmus test of whether the revitalization of the General Assembly can be completed with the requisite boldness and foresight necessary for it to assume its rightful place at the helm of world affairs,” he said.

Among its decisions today, the Assembly approved an oral decision reaffirming its central role n the question of equitable representation on and increase in the membership of the Security Council, and agreed to convene the Open-ended Working Group on that Question and Other Matters related to the Security Council during the upcoming session which will start next month.

The discussions in the Ad Hoc Working Group are grouped into four clusters. The first cluster is focused on the Assembly’s role and responsibilities, as well as its relationship to the other principal organs of the UN and regional organizations.

The second relates to significant technical matters, such as working methods, implementation of resolutions, and agenda streamlining, in addition to discussing options for more time-conscious and secure balloting in the plenary.

The third revolves around a consideration of the role of the Assembly in the selection of the Secretary-General, as well as other executive heads within the UN system.

The fourth cluster includes an examination of the functions of the Office of the President of the General Assembly, its relationship with the Secretariat, and ways in which the Office’s institutional memory can be enhanced. Within this con 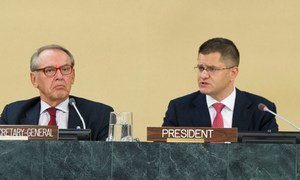