29 August 2013
The head of the United Nations Educational, Scientific and Cultural Organization (UNESCO) today called on all parties involved in the Syrian conflict to safeguard the country’s cultural heritage and take all possible measures to avoid further destruction.

“UNESCO is determined to use its expertise and its networks to help the Syrian people preserve their exceptional cultural heritage,” said the agency’s Director-General, Irina Bokova, after a meeting of experts held at the UNESCO’s headquarters in Paris seeking action to prevent further losses and repair damage where and when it will be possible.

“Protecting heritage is inseparable from protecting populations, because heritage enshrines a people’s values and identities,” Ms. Bokova said. “We have heard today of the serious damage that has already been inflicted on Syria’s heritage. The destruction of sites such as the historic souk in Aleppo has made headlines around the world, clearly reflecting the concern and distress of people everywhere.”

The meeting was chaired by Ms. Bokova and among its participants was the Joint Special Representative of the UN and the League of Arab States for Syria, Lakhdar Brahimi. “Syria’s past is threatened, just as much as its present and its future,” Mr. Brahimi said. “I can bear witness and get your message across to the leaders I meet.”

The experts endorsed UNESCO’s continuing action to raise awareness and share information about the status of Syria’s heritage, notably the country’s six World Heritage sites, important archaeological sites, and moveable heritage, including museums and other collections.

UNESCO has had experience in coordinating actions to preserve heritage in times of conflict, most recently in Mali, Libya, and Iraq. In Syria, it has been training national and regional heritage professionals in an effort to preserve properties and collections from destruction, looting and illegal trafficking.

The agency has also been sharing information available on damage to all types of heritage to alert customs services and art dealers about stolen heritage and help them respect the international ban on trading in looted properties.

“There is no culture without people; and no society without culture,” Ms. Bokova said. “I urge all parties to take all necessary precautions to stop the destruction of Syria’s cultural heritage, which includes some of the most precious in the world.” 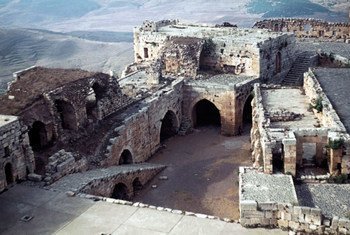 16 July 2013
The head of the United Nations cultural agency today reiterated her call for an immediate end to the further destruction of World Heritage sites in Syria, expressing her “deep shock” after seeing images of the damage to two castles constructed during the Crusades between the 11th and 13th centuries.