The recent adoption by Côte D’Ivoire of two laws on nationality and land tenure – two issues at the heart of the long crisis that has deeply affected Ivorian society – represents a major step towards reconciliation, a United Nations independent expert said today.

The recent adoption by Côte D’Ivoire of two laws on nationality and land tenure – two issues at the heart of the long crisis that has deeply affected Ivorian society – represents a major step towards reconciliation, a United Nations independent expert said today.

“With the adoption of these two laws, a strong dynamic of national reconciliation is underway, reinforced by the release of detainees close to the former regime,” said the UN Independent Expert on the situation of human rights in Côte d’Ivoire, Doudou Diène.

“The law on nationality has redressed a recurrent factor of instability and weakening of the Ivorian society by embracing Côte d’Ivoire’s international commitments on statelessness and human rights,” Mr. Diène said. “The law on land tenure promotes intercommunity cohesion and joint economic prosperity by restoring law and justice as fundamental bedrock of the Ivorian society.”

The laws, which were adopted on 26 August by the National Assembly, address two key issues that are at the heart of the long crisis that has affected Ivorian society, Mr. Diène said, while urging authorities to take appropriate measures to prevent the political manipulation of both issues from worsening current conflicts in the country.

“Political manipulation and ethnicization have made of these issues a time bomb, feeding a culture of violence, eroding values and traditions to live together, and affecting the structure of this ‘region-country’ with a strong and old immigration tradition,” he noted.

The West African country was split by civil war in 2002. A 2010 presidential election, meant to be a culminating point in the peace process, resulted in months of violence when Mr. Gbagbo refused to step down after losing to Alassane Ouattara. Mr. Gbagbo finally surrendered the following April.

With the adoption of the laws, Côte d’Ivoire has made “a significant step forward in the democratic reconstruction process, the consolidation of the rule of law, and the promotion of national reconciliation,” Mr. Diène said.

“I call on the international community to accompany and to consolidate the process, including by reinforcing its economic and social basis by significant investments in Côte d’Ivoire,” he added. 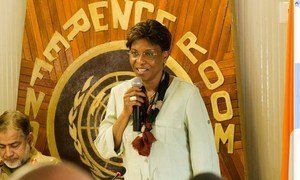