29 August 2013
Secretary-General Ban Ki-moon is cutting short his official visit to Austria to return to New York in preparation for a briefing from the United Nations chemical weapons inspection team which is due to wrap up its work in Syria this weekend.

“Our experts are still on the ground investigating the use of chemical weapons,” Mr. Ban told journalists at Vienna City Hall, adding that the investigation team will continue its activities until tomorrow, leave Syria by Saturday morning and then inform him as soon as they are out.

The team led by Swedish scientist Dr. Åke Sellström, has been carrying out its work without incident following a pause in the investigation Tuesday, when its convoy was attacked by snipers while heading to the Damascus suburb of Ghouta, where chemical weapons were allegedly used on 21 August.

The shortened visit means the UN chief will not participate in the UN European Alpbach Forum, which will now be chaired by President Jose Manuel Barroso of the European Union.

Earlier today, Mr. Ban said he spoke by phone with United States President Barack Obama about how the United Nations, the US and the world can work together, as well as “how we can expedite the process of the investigation.”

Mr. Ban said he expressed his wish that the investigation team should be allowed to continue their work as mandated by the Member States to probe the alleged use of chemical weapons by the Government at Khan al-Asal and other claims.

“I told him that we will surely share the information and the analysis of samples and evidence with Members of the Security Council and UN members in general,” Mr. Ban said.

“We are of the opinion that the situation should be resolved in a peaceful way through dialogue,” he told journalists after the meetings.

Mr. Ban and other senior UN officials, including Joint Special Representative of the UN and the League of Arab States Lakhdar Brahimi, have repeatedly urged pursuing all diplomatic options to bring the Syrian parties to the negotiating table, and stressed there is no military solution to the crisis.

In a joint press encounter last night with Minister of Foreign Affairs Frans Timmermans in the Netherlands, Mr. Ban said that his responsibility and mandate were “to conduct a thorough and complete investigation” of the allegations of chemical weapons use in Syria and any actions on a response would be deemed by the Security Council.

In response to speculation that the West is planning to take military action, Mr. Ban said he would not speculate on anything on which he is not aware, adding, “If there needs to be any such unilateral or military actions… as Secretary-General I would like to emphasize that it is the Charter that provides the framework for action to ensure international peace and security.”

Mr. Ban has reiterated that the use of chemical weapons by anyone, for any reason, under any circumstances are crimes against humanity and that must be held accountable. 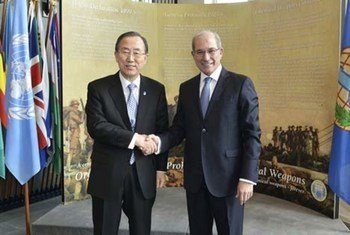 28 August 2013
With Secretary-General Ban Ki-moon and other United Nations officials urging continued cooperation, the UN team investigating alleged use of chemical weapons in Syria was today able to visit several locations in the suburbs of Damascus, including impact sites, where it collected additional information and samples.