28 August 2013
The United Nations Mission in the Democratic Republic of the Congo (MONUSCO) today supported the Congolese Armed Forces (FARDC) in launching an attack against M23 positions on the Kibati heights, north of Goma, in North Kivu.

According to a UN spokesperson, M23 has been using these positions to shell populated areas. The objective of the MONUSCO-supported operation is to remove the threat against Goma.

The Mission has delivered mortar and artillery fire and engaged its attack helicopters, with the FARDC has used attack helicopters, battle tanks and ground forces. The operation is still ongoing, according to the spokesperson, who added that one UN peacekeeper has been killed and seven others have been wounded.

“I am outraged by today's killing of a United Nations Peacekeeper from Tanzania by the M23,” Martin Kobler, Special Representative of the Secretary-General and head of MONUSCO, said in a statement.

“He sacrificed his life to protect civilians in Goma. My thoughts go to his family and all members of his unit in this very difficult moment,” added Mr. Kobler, who visited the area of this most recent fighting earlier this week.

In Goma, Mr. Kobler met with provincial administrative and security authorities, as well as UN military and civilian staff, to assess the situation on the ground. During his meetings, he also made clear his determination to see the UN Mission resolve the issue of armed groups, help restore State authority and fulfil its mandate.

Over the past year, the M23, along with other armed groups, have clashed repeatedly with the FARDC. The rebels briefly occupied Goma in November 2012. The fighting resumed in recent weeks, this time dragging in a group of Ugandan-based rebels, and displaced more than 100,000 people, exacerbating the region's ongoing humanitarian crisis, which includes 2.6 million internally displaced persons (IDPs) and 6.4 million in need of food and emergency aid.

On 28 March this year the Security Council authorized the establishment of the intervention brigade to carry out targeted offensive operations, with or without the FARDC, against armed groups that threaten peace in eastern DRC. At the same time the Security Council called on the M23 to cease immediately all forms of violence and destabilizing activities and for its members to immediately and permanently disband and lay down their arms.

The strengthening of the MONUSCO mandate with the intervention brigade is designed to further support the political objectives of the Peace, Security and Cooperation Framework for the DRC and the region – a peace deal signed in February in Addis Ababa, Ethiopia. 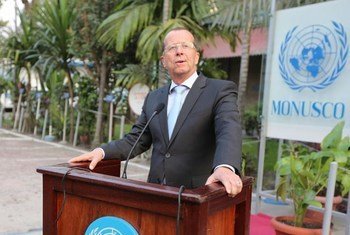 24 August 2013
The head of the United Nations Stabilization Mission in the Democratic Republic of the Congo (MONUSCO) today deplored the death of two civilians killed in demonstrations in Goma, the main city in the vast country's strife-torn eastern region, and has called for an inquiry into the incident.