The ongoing electoral stalemate in Haiti, already linked to socio-economic grievances, could undermine the political and security situations, the new head of the United Nations peacekeeping mission in the country said in her first briefing to the Security Council.

“Continued delay in the holding of long-overdue partial senatorial, municipal and local elections is of increasing concern and poses a series of risks to the stabilization process,” the Special Representative for the Secretary-General in Haiti, Sandra Honoré, told the Council in New York.

Voters need to elect one-third of the country’s 30-member Senate and dozens of municipal posts. The elections have been overdue since late 2011, halted by disagreements over an electoral law whose draft was finally submitted yesterday to the Parliament by President Michel Martelly.

“Despite the executive branch’s repeated public statements in favour of holding the elections as soon as possible, these delays have led a number of political and civil society actors to express scepticism concerning the likelihood that elections will be held in 2013,” Ms. Honoré said.

By early 2014, more Senators’ terms will expire, rendering the country’s Senate and the Parliament ineffective and marking a “real decline in the democratic process Haiti does not have the luxury to afford,” the Special Representative said.

“In such a case, we cannot exclude a possible mobilization of opposition forces and civil society that could destabilize the political and security situation,” she added.

The Security Council had tasked the UN Stabilization Mission in Haiti (MINUSTAH) which Ms. Honoré heads, with supporting the Haitian political process, including its elections.

Noting the “climate of polarization and heightened mutual suspicion,” Ms. Honoré said she has been engaging key political actors to promote dialogue aimed at reaching a minimum agreement on the way forward, particularly concerning the elections.

She has also met regularly with members of the diplomatic corps accredited in Haiti to ensure that the country’s institutions, most notably the Parliament, continue to function beyond January 2014.

On this matter, “it is important that we as the international community remain united with our common message and speak with one voice,” Ms. Honoré stressed to the 15-member Council.

Concerning cholera, the UN envoy said the epidemic has killed 8,173 people and infected over 660,000 since the end of June. The budget of the National Plan for the Elimination of Cholera amounts to $443.7 million for the period from 2013 to 2015, roughly 47 per cent of which has been pledged.

“The United Nations continues to support the Government of Haiti with the various short- and medium-term priorities that need to be addressed to eliminate the transmission of cholera in the country,” Ms. Honoré noted.

Turning to the security situation in the country which continues to rebuild following the January 2010 earthquake which killed some 220,000 people – including UN staff – and left 1.5 million others homeless, Ms. Honoré said the country has remained relatively stable in the past six months.

Among the main challenges are the lack of human resource capacity, the continued need for training and development at the middle management levels, and the need to deploy more cadets, particularly women, into the regions, Ms. Honoré told UN Radio.

She stressed, however, that the gains in stability and security need to be sustained for Haiti to succeed in its ongoing efforts to forge economic partnerships, attract foreign investment and foster socio-economic development – the cornerstone of enduring stability.

The Special Representative also noted that MINUSTAH stands ready to proceed with further adjustments to troop strength as may be mandated by the Security Council in October.

In his latest report to the body, Secretary-General Ban Ki-moon recommended that UN troops on the country be reduced by 15 per cent. A working group in Haiti, made up of the UN and Haitian officials, already has been set up to look at the future of the mission. 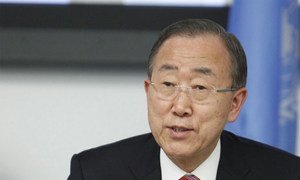 Secretary-General Ban Ki-moon today called for calm and urged Guineans to follow the law amid reports of deadly fighting between ethnic groups.