MONUSCO/Sylvain Liechti
People displaced by fighting between M23 and FARDC set up camp on the outskirts of Goma.

24 August 2013
United Nations humanitarian agencies in the Democratic Republic of the Congo (DRC) strongly condemned the attacks that killed and wounded a number of civilians today as fighting flared between Government and rebel forces near the eastern city of Goma, and urged the parties to “take all precautions” to avoid such acts, and to allow access to relief workers.

“I condemn all attacks causing deaths and injuries among the civilian population, and remind all parties to the conflict that the indiscriminate or deliberate attack against civilians is a war crime”, said the UN Humanitarian Coordinator in DRC, Moustapha Soumare.

In a joint statement, Mr. Soumare, along with UN humanitarian agencies, including the UNICEF, High Commission for Refugees (UNHCR), the World Food Program (WFP) and the Office for Coordination of Humanitarian Affairs (OCHA) “strongly condemned the killing of innocent civilians by military strikes during the fighting between the Congolese Army (FARDC) and the M23 rebel group.”

According to the statement, at least three people were killed and at five others wounded this morning when a shell landed in Ndosho, a suburb of the city of Goma, capital of North Kivu.

The agencies report that another shell fell on the same day near the Mugunga 3 internally displaced persons (IDPs) camp, home to more than 10,000 people. On August 22, numerous shells landed in residential areas of Goma, killing at least four people and wounding 15 - all civilians.

"The parties to the conflict must respect the inalienable rights of men, women and children to life. Civilians should not be targeted," said Barbara Bentein, UNICEF Representative in the DRC, who added that all forces and armed groups involved in the conflict must take care to protect the lives of all civilians in their entirety.

"More than 150,000 people have been displaced towards Goma since 2012. Goma is a place of refuge where the safety of civilians must absolutely be protected by the parties to the conflict," said Stefano Severe, UNHCR Regional Representative.

"International humanitarian law requires parties to the conflict to take all precautions to avoid exposing the civilians," he added.

"We are concerned about the humanitarian consequences of the fighting and call on the warring parties not only to spare civilians, but also to allow humanitarian access to populations in need," said Martin Ohlsen, WFP Representative in the DRC.

Meanwhile, Martin Kobler, the head of the United Nations Stabilization Mission in the country (MONUSCO) also deplored the death of two civilians killed in demonstrations in Goma, and announced that a joint investigation will be carried out by the DRC Police (PNC) and the mission's Police Cell, UNPOL. 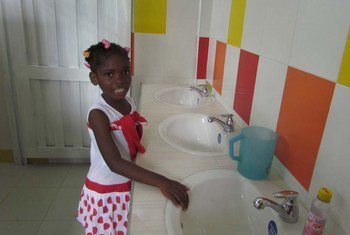 22 August 2013
Calling on the international community to help Colombia build on the “huge progress” made in recent years, a senior United Nations official today urged providing continued support to ensure the Latin American country fully recovers from decades of conflict.