24 August 2013
“Deeply concerned” by renewed armed clashes in eastern Democratic Republic of the Congo, as well as attacks on civilians and United Nations peacekeepers based there, the UN Special Envoy for the Great Lakes called today for an immediate end to the fighting and strongly urged all regional authorities to observe maximum restraint.

“Deeply concerned” by renewed armed clashes in eastern Democratic Republic of the Congo, as well as attacks on civilians and United Nations peacekeepers based there, the UN Special Envoy for the Great Lakes called today for an immediate end to the fighting and strongly urged all regional authorities to observe maximum restraint.

“The attacks on the town of Goma as well as on MONUSCO [UN Stabilization Mission] forces, and their tragic consequences on the civilian populations already traumatized by two decades of conflict, are unacceptable. They must stop immediately,” said Mary Robinson, Special Envoy of the Secretary-General for the Great Lakes region of Africa, in a statement.

“We must do everything to avoid an escalation of tension in the region, promote dialogue, and respect the letter and the spirit of the Addis Ababa Peace, Security and Cooperation Framework for the Democratic Republic of the Congo and the region,” Mrs. Robinson said, referring to the accord signed earlier this year by the Government of DRC along with 10 other countries and four regional and international institutions, which now serves as a blueprint for peace and development in the region.

“The renewed violence underscores, once again, the urgent need to rapidly find a political solution to the crisis,” she said, noting that such a path would be in line with the Communiqué of the Summit of the International Conference on the Great Lakes Region, held in Nairobi on 31 July 2013, the informal Ministerial meeting held in New York on 25 July 2013, as well as the Communiqué of the recent SADC [Southern African Development Community] Summit held in Lilongwe, Malawi, on 18 and 19 August 2013.

“I strongly urge all authorities in the region to observe maximum restraint, to ensure that civilian populations are protected, and to minimize the risk of escalation of the situation,” said Mrs. Robinson, adding that she is in close contact with all parties and continues to monitor the situation very closely.

“My Special Adviser is currently involved in consultations with relevant authorities in order to appeal for calm and restraint,” she said.

Over the past year, the M23, along with other armed groups, have clashed repeatedly with the national forces (FARDC) in the eastern DRC. The rebels briefly occupied Goma in November 2012. The fighting resumed in recent weeks, this time dragging in a group of Ugandan-based rebels, and displaced more than 100,000 people, exacerbating the region's ongoing humanitarian crisis, which includes 2.6 million internally displaced people (IDPs) and 6.4 million in need of food and emergency aid. 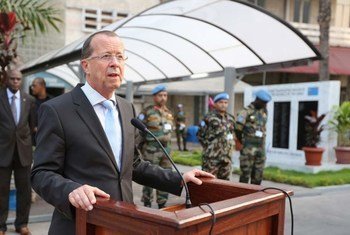 22 August 2013
The head of the United Nations peacekeeping mission in the Democratic Republic of the Congo (DRC) has ordered peacekeepers to take necessary action to protect civilians and prevent armed groups from advancing in the North Kivu province in response to renewed fighting in the region.