23 August 2013
The United Nations General Assembly today proclaimed 6 April as the International Day of Sport for Development and Peace, as the body’s President hailed the decision a “historic” step in recognizing the power of sport to erase cultural barriers and mobilize people around the world.

“Sport can be a powerful handmaiden for peace and reconciliation. It can bring us closer through shared celebration of achievements of universal appeal and attraction,” said Assembly President Vuk Jeremic, adding that ethnic, religious and economic divisions fall by the wayside, along with prejudice, fear and misunderstanding.

“In effortlessly throwing asunder all human barriers, sport is indeed the world’s universal language,” he told the Assembly as he paid tribute to the “broad legacy of achievement” of Jacques Rogge, President of the International Olympic Committee (IOC), who was present at the meeting. Also present was Novak Djokovic, who is ranked the world’s number one tennis player and a Goodwill Ambassador for the UN Children’s Fund (UNICEF).

Mr. Jeremic said that in many ways, sport is an embodiment of humanity’s most valiant characteristics. “It requires perseverance and discipline, engendering the principles of personal integrity, fair-play, and honourable competition, inspiring us to push ourselves beyond limits,” he said hailing the universal values of sport, which the UN and IOC both seek to promote.

“[Sport] can also serve a formidable development tool,” he continued, noting that as the Assembly takes further steps to define the post-2015 development agenda, he hoped the values inherent in sport will inform its deliberations on how to define the Sustainable Development Goals (SDGs).

In his remarks to an informal meeting of the Assembly that followed, Mr. Rogge congratulated Member States on the decision to proclaim the International Day, which, he said, recognizes the value of work being carried out every day in every region of the world to share the joy and benefit of sport with people of all ages and abilities.

Further, the decision would forge closer ties between the UN and the world of sport and build on the work carried out in the framework of the Secretary-General’s annual report on Sport for Development and Peace, which has helped identify areas were the UN, the IOC, non-governmental organizations and the private sector could strengthen collaboration.

“We have seen the true worth of sport and physical activity many times. It builds self-confidence; it defies gender stereotypes; it provides and alternative to conflict and delinquency; it improves health; it can bring hope and a sense of purpose to refugees, impoverished communities and other people ion need,” Mr. Rogge said, adding that sport had played an invaluable role in the global effort to achieve the Millennium Development Goals (MDGs) and combat non-communicable diseases.

Addressing the Assembly on behalf of the world’s athletic community, Mr. Djokovic said that he hoped the International Day would motivate people to do more to cultivate intrinsic sporting values such as fair play, teamwork and respect for opponents.

“These ideals are universal. Every successful society is built on them, and the more we instil respect for these ideals in ourselves, the better the world will be that we leave to our successors,” he said.

UN group meets to promote sports for peace and development 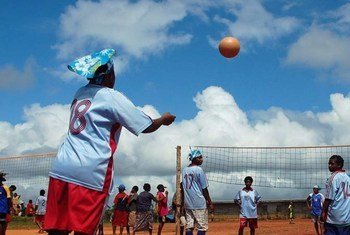 5 June 2013
Sport is a valuable vehicle to reach peace and development objectives, including health, education and gender equality, Secretary-General Ban Ki-moon said today at an international forum in New York.