Jean-Marc Ferré
Michael Kirby, Chairman of the Commission of Inquiry on Human Rights in the Democratic People’s Republic of Korea (DPRK).
23 August 2013

The United Nations panel set up to investigate human rights violations in the Democratic People’s Republic of Korea (DPRK) will travel to Japan next week to meet with people who fled the country and those knowledgeable about the abductions of Japanese nationals decades ago.

Michael Kirby, the chairman of the three-member Commission of Inquiry, said Pyongyang had not replied to an invitation to participate in the commission hearings.

“Lacking direct access to the Democratic People’s Republic of Korea, we are still able to gather numerous first-hand accounts from people who have managed to leave the country in recent years,” Mr. Kirby said in a news release.

“We hope their brave decision to testify will raise the international profile of the human rights situation in North Korea – not just with a general global audience, but also among the member states of the United Nations,” he added in a statement issued by the UN human rights Office.

Mr. Kirby reiterated that the commission is conducting the inquiry with impartiality and with no preconceptions.

The abduction of Japanese citizens by DPRK remains a sharp issue in Japan and a point of tension between the two countries.

In the mid-1970s and early 1980s, a number of Japanese were abducted by suspected agents of the North Korean Government.

“Although the number of abductions is subject to debate, there are at least 17 acknowledged cases. The likelihood is many more,” the Office of the UN High Commissioner for Human Rights (OHCHR).

The hearings will be held on 29 and 30 August at the United Nations University in Tokyo.

The commission is currently in Seoul, Republic of Korea, where is it holding five days of public hearings, as well as other consultations, on potential human rights violations ranging from political prison camps and torture, to religious persecution, discrimination and the right to food in DPRK.

Established by the UN Human Rights Council in March for a period of one year, the commission is tasked with investigating the “systematic, widespread and grave violations of human rights” in DPRK in order to ensure full accountability, in particular for violations which may amount to crimes against humanity.

In addition to Mr. Kirby, a retired judge from Australia, the commission comprises Sonja Biserko, founder and president of the Helsinki Committee for Human Rights in Serbia, and Marzuki Darusman, former Attorney General of Indonesia and the current UN Special Rapporteur on the situation of human rights in DPRK. 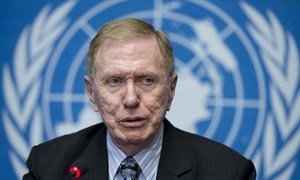 The United Nations panel set up to investigate human rights violations in the Democratic People’s Republic of Korea (DPRK) will begin a series of public hearings next week in Seoul, Republic of Korea, aimed at gathering information from various witnesses.