UNESCO/Dominique Roger
General view of the Island of Gorée, Senegal, which was from the 15th to the 19th century, the largest slave-trading centre on the African coast.
23 August 2013

Marking the anniversary of the first successful slave uprising in the Western hemisphere, the head of the United Nations Educational, Scientific and Cultural Organization (UNESCO) said today that telling the story of the slave trade was a crucial way to pay tribute to the freedom fighters and “honour their contributions to the affirmation of human rights.”

“We must teach the names of the heroes of this story, because they are the heroes of all humankind,” said UNESCO's Director-General, Irina Bokova, in a message to mark the International Day for the Remembrance of the Slave Trade and its Abolition, which is observed annually on 23 August.

The significance and implications of this history should be known to all and taught in and outside schools, through the media and in the public arena, Ms. Bokova said. “May it be a source of respect and a universal call for freedom for future generations.”

The Day commemorates the uprising which took place on 22-23 August 1791, when slaves in Saint Domingue, today Haiti, launched an insurrection which ultimately led to the Haitian revolution.

“Studying this history is tantamount to paying tribute to freedom fighters and to acknowledging their unique contributions to the affirmation of universal human rights,” Ms. Bokova noted, adding that through their struggles, their desire for dignity and freedom, slaves contributed to the universality of human rights.

The heroes of the past also set an example to continue the struggle for freedom, against racial prejudice inherited from the past and against new forms of slavery that subsist to this day, she said.

UNESCO has played a leading role in fostering understanding and recognition of the slave trade. Since the establishment of the Slave Route Project in 1994, the agency has worked to reveal the extent and consequences of the trade and portray the wealth of the cultural traditions – in art, music, dance and culture in its broader area – that African people forged in the face of adversity.

The project consists of creating opportunities to promote mutual understanding and international reconciliation and stability through consultation and discussion. It also raises awareness, promotes debate and helps build consensus on approaches to be taken on addressing the issue of the slave trade and slavery.

In her message, Ms. Bokova stressed that transmission of this history is a cornerstone of the UN agency's efforts to build peace, intercultural dialogue and mutual understanding.

“The slave trade is not merely a thing of the past: it is our history and it has shaped the face of many modern societies, creating indissoluble ties between peoples and continents, and irreversibly transforming the destiny, economy and culture of nations,” she noted.

The Project is promoted by its spokesperson and UNESCO Artist for Peace, Marcus Miller. Ms. Bokova nominated the award-winning jazz musicians, composer and producer last month.

“The story of slavery tells us that we can overcome. That the world can change for the better. And that we can do more than simply survive – we can soar!” he said at the time.

The Project's efforts will contribute to the Decade for People of African Descent, which began this year, and seeks to help boost political commitments in favour of people of African descent.

Earlier this year, the UN honoured the memory of an estimated 15 million innocent victims who suffered over four centuries as a result of the transatlantic slave trade, highlighting the plight of millions more who still endure the brutality of modern slavery.

Nearly 21 million people are trapped in jobs into which they were coerced or deceived and which they cannot leave, according to 2012 estimates by the UN International Labour Organization (ILO). 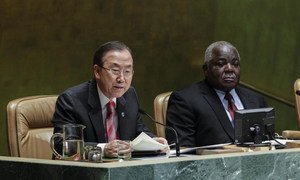 The United Nations today honoured the memory of an estimated 15 million innocent victims who suffered over four centuries as a result of the transatlantic slave trade, while highlighting the plight of millions more who still endure the brutality of modern slavery.