UNHCR/O. Laban-Mattei
This girl sheltered in Zaatari refugee camp in Jordan is one of a million Syrian children who have become refugees because of the war.
23 August 2013

“This one millionth child refugee is not just another number,” said the Executive Director of the UN Children's Fund (UNICEF) Anthony Lake. “This is a real child ripped from home, maybe even from a family, facing horrors we can only begin to comprehend.”

Mr. Lake said that while humanitarian organizations are working to alleviate the suffering of those affected by the crisis, the shameful milestone reflects the failure of the international community to respond to the needs of Syrian children.

“We should stop and ask ourselves how, in all conscience, we can continue to fail the children of Syria,” he said.

According to UNICEF and the UN High Commissioner for Refugees (UNHCR), children make up half of all refugees. Most have arrived in Lebanon, Jordan, Turkey, Iraq and Egypt. Increasingly, they are fleeing to North Africa and Europe.

The majority of child refugees, some 740,000, are under the age of 11, and more than 3,500 children in Jordan, Lebanon and Iraq have crossed Syria's borders either unaccompanied or separated from their families, making them vulnerable to multiple threats including child labour, early marriage and the potential for sexual exploitation and trafficking.

Inside Syria, some 7,000 children have been killed during the conflict, and UNHCR and UNICEF estimate that over 2 million have been internally displaced.

“What is at stake is nothing less than the survival and wellbeing of a generation of innocents,” said High Commissioner for Refugees António Guterres. “The youth of Syria are losing their homes, their family members and their futures. Even after they have crossed a border to safety, they are traumatized, depressed and in need of a reason for hope.”

UNHCR and UNICEF are providing support to millions of affected families and children. More than 1.3 million children in refugee communities have been vaccinated against measles this year with the support of UNICEF and its partners. Nearly 167,000 refugee children have received psychosocial assistance, more than 118,000 children have been able to maintain their education inside and out of formal schools, and more than 222,000 people have been provided with water supplies.

UNHCR has registered all 1 million children, giving them an identity. The agency also helps babies born in exile get birth certificates, preventing them from becoming stateless.

Mr. Lake and Mr. Guterres stressed that funds for humanitarian assistance are running low, with the Syria Regional Refugee Response plan being only 38 per cent funded. They also underlined the need to find a political solution to the crisis, and appealed to all parties to the conflict to stop targeting civilians and cease recruitment of children.

Those who fail to meet these obligations under international humanitarian law should be held fully accountable for their actions, they added. 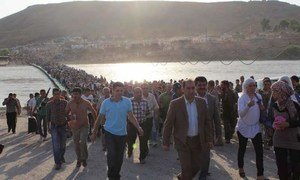 Thousands of Syrians fleeing the conflict in their homeland have streamed into northern Iraq in a sudden movement across a recently constructed bridge, the United Nations refugee agency reported today.