WFP/George Fominyen
A woman in Dorein, South Sudan, sits next to food assistance she has just received from WFP for her family.

Throughout the end of the year, people displaced by violence, returnees, refugees and vulnerable host communities will draw assistance for the funds to receive clean water and sanitation, education, healthcare, mine clearance and protection. The funds will also pay for key logistics and emergency telecommunications in deep field locations.

“The money will help people in South Sudan who have been worst affected by violence, disease and displacement. Our goal is to make sure aid gets to those who need it most and as quickly as possible,” said Toby Lanzer, the UN Humanitarian Coordinator in South Sudan.

According to a spokesperson for UN Secretary-General Ban Ki-moon, more than 4 million people are affected by food insecurity in South Sudan, over 70,000 have been internally displaced since the beginning of the year and the country currently hosts some 220,000 refugees, mostly from Sudan.

The CHF is a tool that provides funding for urgent humanitarian action and rapid response to emergencies. Donors contribute revenue over the course of the year for onward allocation to aid agencies when resources are needed most.

“To date, the CHF has not channelled resources towards food assistance, as the scale of those requirements would have depleted the fund’s resources. Organizations distributing food, therefore, rely on other funding to meet the needs of the most vulnerable food-insecure,” continued Mr. Lanzer.

Since January, Australia, Belgium, Denmark, Ireland, Norway Sweden and the United Kingdom have all provided generously to the fund. With the new allocation of $33 million, the CHF will have channelled around $90 million to non-governmental organizations and UN agencies in 2013.

“Across South Sudan, the World Food Programme is helping around 1.7 million people, but it requires an additional $84 million to be able to reach all of the estimated 2.85 million people it has planned to help this year,” concluded Lanzer. 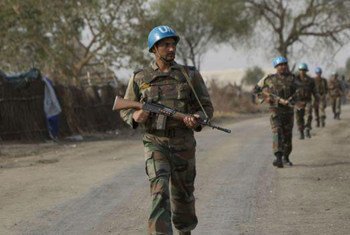 20 August 2013
The United Nations peacekeeping mission in South Sudan is stepping up its military patrolling in parts of Jonglei State to allow families to return home and to provide access for humanitarian aid.