The United Nations peacekeeping mission in the Democratic Republic of the Congo (DRC) has stepped up patrols and is sending in helicopters to protect civilians in the eastern part of the country following continued clashes between armed groups.

The UN Stabilisation Mission in the Democratic Republic of the Congo (MONUSCO) has also activated its contingency plan in the area, a UN spokesperson told journalists in New York.

“Its peacekeepers are providing security to 1,000 civilians in and around its base,” the spokesperson said.

Combatants from four armed groups exchanged fire near its base in Pinga, North Kivu province, on Monday, according to MONUSCO. Three mortar bombs landed near the base.

This latest bout of violence came as Martin Kobler visited North Kivu for the first time as the new Special Representative of the Secretary-General in the country during which he pledged to do everything in my power to address the armed groups’ issue in the Kivus and in the rest of the eastern DRC.

Over the past year, the M23, along with other armed groups, have clashed repeatedly with the national forces (FARDC) in the eastern DRC. The rebels briefly occupied Goma in November 2012. The fighting resumed in recent weeks, this time dragging in a group of Ugandan-based rebels, and displaced more than 100,000 people, exacerbating the region’s ongoing humanitarian crisis, which includes 2.6 million internally displaced people (IDPs) and 6.4 million in need of food and emergency aid. 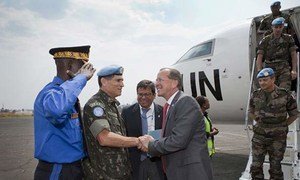 During his first visit to the North Kivu province of the Democratic Republic of the Congo (DRC), a United Nations envoy reiterated the world body’s determination to help restore State authority in the eastern region of the vast country.