A senior United Nations official has stressed the importance of South-South cooperation to advance agricultural development in developing countries, adding that this collaboration can also help end hunger in the African continent.

“It is time for Latin America to increase its contribution to African development,” Director-General of the Food and Agricultural Organization (FAO) José Graziano da Silva said at the second Sub-Saharan and Argentinean Agriculture Ministers Meeting in Buenos Aires, which this year focuses on ‘Efficient Agriculture for a Sustainable Agricultural Development.’

Mr. da Silva, who was one of the co-chairs of the meeting, which opened yesterday and wraps up on Friday, 23 August, noted that cooperation between Latin America and Africa could be mutually beneficial for the regions as they share similar challenges as well geographic, climate and social characteristics.

He also reiterated FAO’s commitment “to strengthen and channel exchanges between Latin America and Sub-Saharan Africa with the aim to adopt, adapt and broaden best practices that promote agricultural development.”

In addition, South-South cooperation could also help make strides in the fight against hunger, Mr. da Silva said, emphasizing that international and multi-stakeholder cooperation will play a crucial role in meeting the Zero Hunger Challenge.

Launched by Secretary General Ban Ki Moon at last year’s UN Conference on Sustainable Development (Rio+20), the challenge aims for a future where every individual has adequate nutrition. Its five objectives are to make sure that everyone in the world has access to enough nutritious food all year long; to end childhood stunting; to build sustainable food systems; to double the productivity and income of smallholder farmers, especially women; and to prevent food from being lost or wasted.

“International cooperation plays an important role in achieving the sustainable and hunger-free future we all want because, in the globalized world we live in today, it is impossible to achieve the eradication of hunger and extreme poverty without working together,” Mr. da Silva said.

He pointed to the High-Level Meeting of African and International Leaders, held in July in Addis-Ababa, Ethiopia under the auspices of the African Union, FAO and the Lula Institute. During the meeting, African leaders, together with representatives of international organizations, civil society, the private sector, cooperatives, farmers, youth groups, academia and other partners unanimously adopted a declaration calling to end hunger in Africa by 2025. 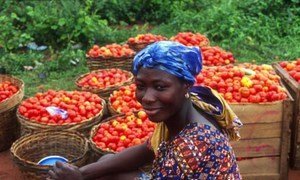