The United Nations peacekeeping mission in South Sudan is stepping up its military patrolling in parts of Jonglei State to allow families to return home and to provide access for humanitarian aid.

The UN Mission in South Sudan (UNMISS) said in a statement that it intensified its patrols in recent days in Pibor and Gumuruk towns, and launched sustained patrols in areas outside both towns to help create a secure environment which allows civilians to safely return to these towns and access the ongoing food distribution.

“The patrols are being conducted daily, both on foot and vehicles, moving beyond the boundaries of both Pibor and Gumuruk towns and covering a radius up to 18 km so far,” UNMISS said.

Fighting between State and non-State armed actors, and a resurgence of inter-communal clashes had displaced thousands and cut off an estimated 100,000 civilians in the area from life-saving aid.

While on patrols, the ‘blue helmets’ locate vulnerable displaced civilians affected by recent fighting, the Mission said. They explain the situation in Pibor and Gumuruk towns and the ongoing food distribution, and gather information on the location of other civilians and their condition.

The peacekeeping patrols are carried out with support and cooperation of the Government of the Republic of South Sudan and its Sudan People’s Liberation Army (SPLA), the Pibor County authorities, as well as armed groups in the area where patrols are conducted.

The intensive patrolling is part of continuing efforts by UNMISS to bolster the implementation of its protection of civilians mandate and to help establish an improved security environment, according to the Mission. 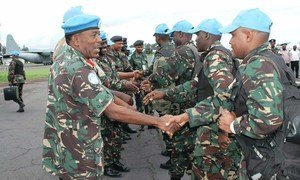 A contingent of Tanzanian soldiers arrived in the eastern city of Goma in the Democratic Republic of the Congo (DRC) today as part of the intervention brigade authorized by the United Nations to help neutralize armed groups in this volatile part of the country.