The United Nations in Haiti today called on key political, religious and community leaders to inspire respect for rights and encourage restraint from expressions of hatred and contempt amid increase in homophobic violence in the country.

“The UN Mission and United Nations agencies and programmes in Haiti are deeply concerned by the recent increase in homophobic violence in the country,” the UN Stabilization Mission in Haiti (MINUSTAH) said in a statement.

“The UN urges all Haitians to continue working together towards the construction of a state based on the respect for the rule of law; respect for others, tolerance, individual dignity and human rights,” MINUSTAH added.

The statement follows a weekend attack on the engagement party of a gay couple, with people reportedly throwing stones and setting cars on fires.

“The UN appreciates the intervention of the national authorities to rescue victims of violence and urges increased efforts to prevent further incidents and to prosecute and hold accountable those responsible for the violence,” according to the statement released by MINUSTAH.

Echoing a 21 July statement by la Ministre Déléguée auprès du Premier Ministre Chargée des Droits Humains et de la Lutte Contre la Pauvreté Extrême, the UN community in Haiti reiterated that “tolerance, love, solidarity, serenity, and the respect for others, as well as fraternity, and justice for all remain the foundations of a growing democratic society”.

The statement also noted that Article 19 of the Haitian Constitution stipulates the right “to life, health, and respect of the human person for all citizens without distinction, in conformity with the Universal Declaration of the Human Rights”.

The Office of the UN High Commissioner for Human Rights (OHCHR) and partners launched in June in Cape Town, South Africa, a year-long effort called ‘Free & Equal’ to raise awareness and respect for lesbian, gay, bisexual and transgender (LGBT) equality.

Calling it an “unprecedented” initiative, Secretary-General Ban Ki-moon commended the campaign’s core messages: human rights are universal and we can change attitudes for the better.

“The Secretary-General has consistently called on world leaders to address violence against LGBT members of our human family,” his spokesperson said in a statement, adding that Mr. Ban is personally committed to championing this cause. 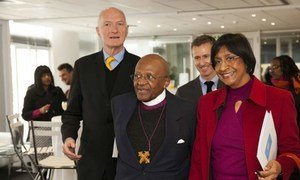