19 August 2013
The United Nations today honoured aid workers who have lost their lives in the line of duty, marking the tenth anniversary of the attack on UN headquarters in Baghdad, and the World Humanitarian Day inspired by that tragic event.

“We commemorate their sacrifice and reaffirm our commitment to the life-saving work that humanitarians carry out around the world, every day, often in difficult and dangerous circumstances where others cannot or do not want to go,” Secretary-General Ban Ki-moon told the memorial participants ahead of a minute of silence for the 22 people killed in Iraq on 19 August 2003, as well as the 30 other UN colleagues killed in the past 10 months.

“Our blue flag may be tattered at times. Already this year, more of our colleagues have been killed than in all of 2012,” Mr. Ban said, adding that the most meaningful tribute to the spirit of those killed is to carry on their work.

Earlier in the morning at a wreath laying ceremony in New York, Mr. Ban met with some families and friends of UN colleagues and partners killed in Baghdad in 2003, including relatives of Special Representative Sergio Vieira de Mello.

In Mr. de Mello’s home country of Brazil, the Under-Secretary-General for Humanitarian Affairs and Emergency Relief Coordinator Valerie Amos participated in a series of events to mark the senior UN official’s legacy.

“Today is a day of mixed emotions for everyone involved in humanitarian work,” Ms. Amos said. “We remember those we lost in Baghdad, and we remember all aid workers who have lost their lives. But in their memory, we also celebrate the humanitarian spirit.”

To harness the worldwide expression of goodwill, the World Humanitarian Day campaign this year launched ‘The World Needs More ___’ campaign that seeks to turn people’s words into real support for communities affected by humanitarian crises.

‘The World Needs More__’ campaign enables leading international brands to sponsor a word they believe the world could use more of. Between 19 August and 24 September, people can “unlock” money pledged by these brands by sharing the sponsored words through social media, SMS or through the campaign website worldhumanitarianday.org.

Every time a sponsored word is shared, $1 will be unlocked and go towards aid efforts in the world’s most underfunded humanitarian crises. The campaign is a collaborative effort between the UN Foundation, the UN Development Programme (UNDP), the UN Office for the Coordination of Humanitarian Affairs (OCHA), the International Council of Voluntary Agencies (ICVA), and advertising agency Leo Burnett New York.

Senior officials and celebrities are taking place in the campaign. Mr. Ban chose the word “teamwork” noting that “in a time of global challenges, people and countries need to work together in common cause for peace, justice, dignity and development.”

Ms. Amos said, “It is clear that the world needs more #Humanity.” She added that as humanitarian needs grow, if the UN and its partners are to meet those rising needs, it must keep engaging with new partners and supporters. “This campaign is a chance to do that.”

In a video interview launched for the campaign, singer Beyoncé, who last year filmed a World Humanitarian Day video in the General Assembly Hall, elaborated on what the Day means to her. She said the world needs more empowered men and women and so will be championing #TheWorldNeedsMore #Strength.

The UN and its partners are holding World Humanitarian Day events in more than 50 cities around the world.

In Baghdad, Under-Secretary-General for Political Affairs Jeffrey Feltman participated in a memorial service that included tree planting and a minute of silence in remembrance of “cherished” colleagues and staff members.

“Our ongoing work today here in Iraq is the best possible tribute to those who perished ten years ago,” said Mr. Feltman, adding that Iraq is at another crossroads and condemning the daily acts of terrorism and sectarian violence facing the country.

Mr. Feltman expressed the UN’s solidarity with the Iraqi people and met with the political leadership of the country as part of his two-day visit to Baghdad. “Iraq’s political leaders have a clear responsibility to leave no space to those who seek to exploit the political stalemate through violence and terror, and undermine a democratic Iraq.”

“As we aim for a world free from hunger and poverty, we must support and enable the challenging work of those who spend their lives striving to make this goal a reality,” said WFP Executive Director, Ertharin Cousin, in a statement for the Day. “This means recognizing and respecting the humanitarian principles of humanity, neutrality, impartiality and independence. It means allowing and facilitating safe passage for staff trying to reach the most vulnerable communities.”

In Myanmar, Resident and Humanitarian Coordinator Ashok Nigam called on the people of the country to celebrate the “inspirational spirit” that is humanitarian work while also remembering the aid workers who lost their lives in the line of duty.

“Of particular concern to me on this World Humanitarian Day is the arbitrary arrest and detention of four Myanmar humanitarian workers employed by international non-government organizations who have now been in custody for over a year in connection with the inter-communal events in Rakhine State,” said Mr. Nigam. “The freedom of these four humanitarian workers is long overdue.”

In South Sudan, which has one of the largest aid operations in the world, Humanitarian Coordinator Toby Lanzer said the spirit and courage of aid workers in the field is an inspiration to him.

“Aid workers must be allowed to carry out their work for the benefit of communities unhindered and in safety,” he said, adding that his word in the humanitarian campaign is ‘solidarity’.

In Bangkok, Thailand, the UN office for the Coordination of Humanitarian Affairs (OCHA) and partners are hosting the regional launch of “The World Needs More #______” campaign featuring dance performances, brief statements by local humanitarian workers and humanitarian journalists, and a concert by the Thailand-based rockabilly group, Trix ‘O’ Treat.

From Nepal, the athlete Gyanlal Maharjan is riding his bicycle from China to New Zealand as he says “The World Needs More #Peace”. Gyanlal is sponsored by the Nepal Olympic Committee, the Nepal Cyclist Association and National Sports Council.

In Kobe, Japan, a new smartphone app developed by the Bikers Emergency Response Team (BERT) to locate disaster survivors on a Google map is being launched.

In Bangladesh, OCHA and Islamic Relief are co-hosting WHD sporting events in the districts of Satkhira and Sylhet, while in the Philippines, a series of events will be held in Manila and Mindanao, including an exhibition hosted in the lobby of the RCBC building in Manila. Events (co-)hosted by national authorities will also be held in Australia, Fiji, and Sri Lanka, among others.

To hear what some aid workers from around the world think the world needs more of, click here. 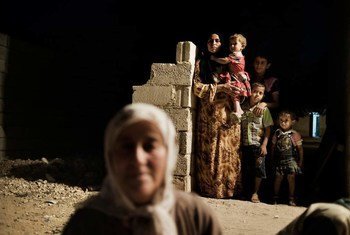 2 August 2013
Frustrated by the dire plight of civilians in Syria, the United Nations humanitarian chief today reiterated her call for an end to the fighting, access for aid workers, and respect for international human rights and humanitarian law.