A group of independent United Nations human rights experts today called for restraint and an immediate end to violent confrontations that have seen hundreds killed and thousands injured in the Egyptian capital in recent days.

“Egypt is facing an escalating and deeply worrying human rights crisis,” they stressed in a news release, while urging all parties to take immediate steps towards political reconciliation.

“We condemn any excessive use of force by the security forces and urge a full investigation into their actions,” said Chaloka Beyani, who currently heads the Coordination Committee of international experts appointed by the UN Human Rights Council.

“Peaceful demonstrations must not be met with violence, and those responsible for ordering and perpetrating arbitrary killings and other human rights violations are accountable for their actions under national and international law.”

The experts underlined that the imposition of the state of emergency that was announced this week could not justify the suspension of non-derogable human rights, and that no circumstances whatsoever could justify summary executions, torture, enforced disappearances and arbitrary detentions.

“We also condemn any violence perpetrated by protesters and urge them to remain peaceful and reject violence and retaliation,” Mr. Beyani said. “Political, religious and community leaders on all sides must not incite further violence and should take urgent steps to defuse tensions and the current extremely dangerous situation.”

The experts voiced their alarm at the violence and dismay at the death toll, which includes women, young people and members of the media, and which may have exceeded 600 following violence on Wednesday as the security forces took action to break up protest camps in central Cairo. “These serious violations of international human rights law must not remain unpunished,” they underscored.

“In the current highly volatile climate, we call upon the Egyptian security forces not to respond forcibly to new protests that are likely in the wake of Wednesday’s violence, the high death toll and calls for such protests,” they said. “We appeal to all parties to fully respect international human rights standards and exercise restraint.”

The experts called for calm and immediate steps towards political reconciliation, and appealed for tolerance, including religious tolerance following assaults on places of worship. They also expressed the need to put a stop to the high levels of sexual violence that have been reported.

“A period of dialogue, reconciliation and inclusive political transition must begin that recognizes the concerns of all in society and has the objective of ensuring a stable, democratic and united Egypt,” they stressed.

Furthermore, the Coordination Committee urged the Egyptian Government to respond positively to the requests of special procedures to visit the country to undertake essential human rights observation and assist the authorities in undertaking essential measures to ensure the protection and promotion of all human rights. 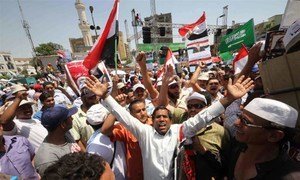