14 August 2013
The Security Council today called for a comprehensive regional approach to combat the threat of piracy and armed robbery at sea in the Gulf of Guinea, and reiterated its call on Member States to prosecute perpetrators in accordance with international laws.

“The Security Council expresses its deep concern at the reported number of incidents and level of violence of acts of piracy and armed robbery at sea in the Gulf of Guinea, in the first half of 2013,” the 15-member body said in a presidential statement.

The Council also reiterated its deep concern about the threat to international navigation, the security and economic development of States in the region, to the safety and welfare of seafarers and other persons, as well as the safety of commercial maritime routes, caused by the illegal activities off the western coast of Africa.

It also noted that international law, as reflected in the 1982 UN Convention on the Law of the Sea, sets out the legal framework applicable to activities in the ocean, including countering piracy and armed robbery at sea.

In the statement, the Council reiterated its calls on States in the region to criminalize piracy and armed robbery at sea under their domestic law, and to prosecute perpetrators, consistent with applicable international law, including international human rights law.

In addition, it urged the need to investigate and prosecute “anyone who incites or intentionally facilitates such crimes, including key figures of criminal networks involved in piracy who illicitly plan, organize, facilitate, or finance and profit from such attacks.”

The Council noted that neighbouring governments and regional organizations have taken steps to combat piracy. Most recently, Western African leaders met in June at the Summit of the Gulf of Guinea Heads of State and Government on maritime safety and security in Cameroon to establish an effective framework to combat piracy and armed robbery at sea.

At the Summit, participants adopted the ‘Code of Conduct concerning the Prevention and Repression of Piracy, Armed Robbery against Ships, and Illegal Maritime Activities in West and Central Africa’, which defines the regional maritime security strategy and paves the way for a legally binding instrument. The Council today welcomed this move and encouraged the regional members to sign and implement the Code “as soon as possible.”

These include a plan to establish an inter-regional centre in Cameroon responsible for coordinating the implementation of the regional strategy for maritime safety and security.

Wrapping up visit, Ban calls for strengthening bonds between UN and Pakistan 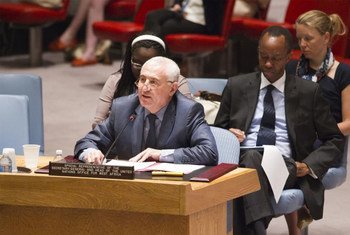 10 July 2013
Coordinated efforts and enhanced regional and international cooperation are key to address the myriad sources of instability in West Africa, a United Nations envoy told the Security Council today.