UNFPA
Drought in Namibia has resulted in crop failure.
12 August 2013

The United Nations Children’s Fund (UNICEF) is scaling up support, including nutrition education and infant feeding activities, in Namibia, which is currently facing its worst drought in three decades.

According to the country’s Directorate for Disaster Risk Management, all 13 regions have been affected by the drought, with major shortages of water, both for humans and animals, and food.

UNICEF said an estimated 778,000 Namibians, a third of the population, are either severely or moderately food insecure. Families are selling assets such as livestock, reducing the number of meals eaten in a day, migrating to cities to find work.

In May, the Government declared an emergency, and committed around $20 million to provide food and water to affected people.

Aid agencies have also stepped in to help, UNICEF pointed out, but added that as numbers of affected communities continue to rise, funding gaps are widening. The agency needs $7.4 million to help an estimated 109,000 children under the age of 5 at risk of malnutrition.

“So, in addition to supporting the Government and key partners like the Namibian Red Cross, we are focusing on making sure communities have access to water, sanitation and hygiene facilities, that communities are educated about nutrition and early infant feeding and that school attendance is being monitored.”

The drought is aggravating an already serious rate of stunting, a form of chronic undernutrition, said UNICEF. In Namibia, 29 per cent of children under 5 are stunted – and in an emergency, early detection of malnutrition can often mean the difference between life and death. 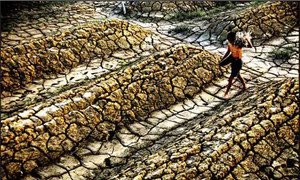 Countries must work collectively to build resilience and prepare themselves against drought, United Nations officials stressed today, highlighting the extensive costs of this global threat.