Marking International Youth Day, United Nations officials today highlighted the plight as well as the contributions of young migrants, who often face hard conditions away from their homes.

“It is important to emphasize the positive contribution young migrants make to societies of origin, transit and destination – economically and by enriching the social and cultural fabric. Most work hard to earn a living and improve their circumstances,” Secretary-General Ban Ki-moon said in his message for the Day.

“The remittances they send to support families in their home countries are a major contributor to economies worldwide,” Mr. Ban said. “When they return home, young migrants often enhance development by applying skills and ideas acquired abroad. And, in many cases, women are empowered through migration as they gain financial and social independence.”

Following a recommendation from the World Conference of Ministers Responsible for Youth, the General Assembly declared 12 August to be International Youth Day in 1999. The theme of this year’s Day is “Youth Migration: Moving Development Forward.”

Of the annual total of some 214 million international migrants, young people constitute more than 10 per cent, yet too little is known about their struggles and experiences. They are often accused by communities and politicians of taking jobs from local people, exposing them to further risk of discrimination. In other cases, young people left behind by migrating parents face psychological and social challenges and greater vulnerability.

“Poverty, crowded and unsanitary living conditions and the challenges of finding decent employment are regular features of the migrant experience. These challenges are exacerbated by the current global economic and financial crisis,” Mr. Ban said.

“In transit and at their final destinations, many young migrants face equal or greater struggles, including racism, xenophobia, discrimination and human rights violations. Young women, in particular, face the risk of sexual exploitation and abuse,” he added.

Mr. Ban urged Member States to consider the issue of youth migration during the High-Level Dialogue on International Migration and Development, which will be held in October during the General Assembly session.

“I encourage Member States, youth-led organizations and other stakeholders to act to promote the rights of all young migrants and maximize the development potential of youth migration.”

The Director-General of the International Labour Organization (ILO), Guy Ryder, said the Day provides an opportunity to highlight the economic boost and social development that youth migration can bring to countries when it takes place in conditions of freedom, equity, and security. However, he warned that when these conditions are not met, many young migrants are trapped in exploitative jobs.

“And too often, they – like other migrants – become scapegoats for the shortcomings of economic and social systems,” Mr. Ryder said, adding that both host countries and countries of origin should undertake measures to protect migrants and create adequate job conditions for them.

“Shaping effective policies for decent work for young people – at home and in the context of migration – requires the engagement of governments, employers’ organizations and trade unions in social dialogue,” he said.

Christian Salazar, Deputy Director of the Programme Division at the UN Children’s Fund (UNICEF), told the event that young migrants have great potential to contribute to the populations they leave and join, and migration presents myriad positive opportunities for young persons, as well as for countries of origin and destination.

“However, a lack of protection, respect and fulfilment of human rights within migration makes them vulnerable to human rights abuses and prevents them from contributing their energy and skills to development,” Dr. Salazar stated. “Only by recognizing and addressing these vulnerabilities can the full potential of youth migration be realized.” 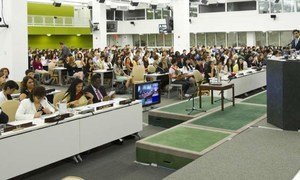