UNFPA
Indigenous forest-dwelling people of the Republic of Congo.
9 August 2013

Marking the International Day of the World’s Indigenous Peoples, United Nations officials today urged governments to honour the treaties and agreements established with their indigenous groups, stressing that respecting official policies is the only way to maintain peace and advance development.

“We must ensure the participation of indigenous peoples – women and men – in decision-making at all levels,” Secretary-General Ban Ki-moon said in his message for the Day, adding that consensual agreements between States and indigenous groups “enable better understanding of their views and values and are essential for protecting and promoting rights and establishing the political vision and necessary frameworks for different cultures to coexist in harmony.”

With more than 5,000 distinct indigenous groups in some 90 countries, indigenous people make up more than 5 per cent of the world’s population, representing 370 million people.

The theme of this year’s World Indigenous Day – which has been marked annually on 9 August since 1995 – is “Honouring treaties, agreements and other constructive arrangements.” It aims to highlight the importance of honouring arrangements between States, their citizens and indigenous peoples that were designed to recognize indigenous peoples’ rights to their lands and establish a framework for living in proximity and entering into economic relationships.

“It is important that we strive to strengthen partnerships that will help preserve cultural vigour while facilitating poverty reduction, social inclusion and sustainable development,” Mr. Ban said.

He noted that it is particularly important to involve indigenous groups in discussion regarding the post-2015 development agenda, ensuring their culture, identity and perspective are taken into account when defining priorities.

The Special Rapporteur on the rights of indigenous peoples, James Anaya, underlined that respecting treaties is crucial to advance reconciliation with indigenous peoples and address historical wrongs that have left them at a disadvantage.

“Honouring treaties and other long-standing agreements can go far in helping to build trust among indigenous peoples and to rebuild relationships between States and indigenous peoples in a true spirit of good faith, partnership, and mutual respect,” he said.

Mr. Anaya called on governments to respect all agreements – old and new – to provide a basis for reconciliation and overcome all obstacles to the full realization of indigenous people’s rights.

“In no instance should new treaties or agreements fall below or undermine the standards set forth in the Declaration on the Rights of Indigenous Peoples or established in other international sources,” he said.

Adopted by the General Assembly in September 2007 after more than two decades of debate, the Declaration sets out the individual and collective rights of indigenous peoples, as well as their rights to culture, identity, language, employment, health, education, and other issues.

The UN Children’s Fund (UNICEF) drew attention to the challenges faced by indigenous girls and women in particular, with evidence showing that the experience of violence is heightened among females of indigenous background because of a myriad of barriers, including access to services such as health care, protection, birth registration and schooling.

In a news release, the agency said it will scale up initiatives specifically targeted at enhancing the rights of indigenous children and adolescents. These include support to legal and policy reforms, bilingual education, and culturally-sensitive maternal health services and birth registration.

The International Labour Organization (ILO) reaffirmed its commitment to work for the realization of indigenous peoples’ rights so that they may have a fair chance of decent work.

It also drew attention to next year’s 25th anniversary of ILO’s Indigenous and Tribal People’s Convention 1989 (No. 169), which calls on States to build partnerships with indigenous peoples through consultation and participation in decision-making processes on matters affecting them.

ILO also appealed for support for the UN Indigenous Peoples Partnership, an inter-agency initiative launched in 2011 that promotes alliances between indigenous peoples, governments and social partners at the country level for effective implementation of the Convention.

To mark the Day, more than 200 indigenous and non-indigenous paddlers will arrive today at Pier 96 in New York City, after having collectively travelled hundreds of miles on rivers and horseback to honour the Two Row Wampum treaty between Dutch immigrants and the Haudenosaunee, signed in 1613.

“The Two Row is the oldest and is the grandfather of all subsequent treaties,” said Oren Lyons, the Faithkeeper of the Onondaga Nation’s Turtle Clan, who has represented the Haudenosaunee at the UN and elsewhere. “It set a relationship of equity and peace. This campaign is to remind people of the importance of the agreements.” 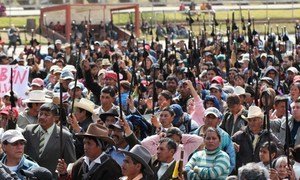 Ahead of the International Day of the World’s Indigenous People, the United Nations human rights chief today urged States to do more to honour and strengthen their treaties with indigenous peoples, no matter how long ago they were signed.