Secretary-General Ban Ki-moon has expressed his sincere gratitude to King Abdullah bin Abdulaziz Al Saud of Saudi Arabia for his announcement of a $100 million contribution for United Nations counter-terrorism efforts.

“The Secretary-General expresses his appreciation for the significant contribution the Kingdom of Saudi Arabia is making under the wise leadership of the King to strengthen international peace and security, especially in the global fight against terrorism,” said a statement issued on Wednesday by Mr. Ban's spokesperson.

This latest contribution will “greatly strengthen” the world body's capacity to assist Member States through the UN Counter-Terrorism Centre (UNCCT) and other relevant UN bodies in implementing the UN Global Counter-Terrorism Strategy, the statement added.

Adopted by the General Assembly in September 2006, the Strategy is based on four pillars: tackling the conditions conducive to the spread of terrorism; preventing and combating terrorism; building States' capacity to prevent and combat terrorism and to strengthen the role of the UN system in that regard; and ensuring respect for human rights for all and the rule of law as the fundamental basis for the fight against terrorism.

The UNCCT, based at UN Headquarters in New York, was launched in 2011 with the help of a voluntary contribution from the Saudi Government. Operating under the UN Secretary-General and the umbrella of the Department of Political Affairs, the Centre contributes to the implementation of the Strategy and engages with over 30 entities with expertise on a wide range of counter-terrorism related subjects.

In yesterday's statement, Mr. Ban reaffirmed his commitment to continue to work with all Member States through relevant UN counter-terrorism bodies to strengthen the international community's efforts to combat the global scourge of terrorism. 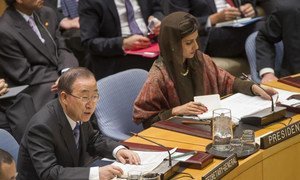