“This development will bring about peace between all Ivorian political actors,” said the Secretary-General’s Special Representative and head of UNOCI, Aïchatou Mindaoudou.

“It contributes to the pursuit for equal justice and is a good sign for a national dialogue that is truly republican, as part of the search for lasting reconciliation in Côte d’Ivoire.”

UNOCI was established in 2004 by the Security Council to facilitate the peace process between the rebel-held north and Government-controlled south following the 2002 civil war.

The West African nation’s 2010 presidential election, meant to be the culminating point in the peace process, resulted in months of violence when Mr. Gbagbo refused to step down after losing to Alassane Ouattara. Mr. Gbagbo finally surrendered the following April.

In the aftermath of the post-election violence that followed the 2010 presidential polls, UNOCI assisted with a number of key tasks, including the restoration of law and order, national reconciliation, the holding of legislative elections and economic recovery.

Ms. Mindaoudou encouraged all Ivorian political actors to seize the occasion to commit to an inclusive political dialogue and national reconciliation, which are prerequisites to establishing lasting peace and economic development in the country.

Among the officials released are the president of the Front Populaire Ivoirien, Pascal Affi N’Guessan; the son of the former president, Michel Gbagbo; and the former Minister of Defence, Lida Kouassi. 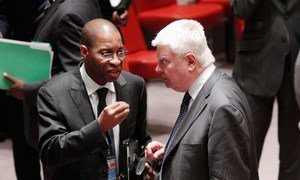