True security is based on people’s welfare and not on military annihilation, senior United Nations officials said today, marking the 68th anniversary of the atomic bombing of Hiroshima and later Nagasaki, and honouring the survivors of the bombings known as ‘hibakusha.’

“We are united in countering the erroneous view that security is achieved through the pursuit of military dominance and threats of mutual annihilation,” Secretary-General Ban Ki-moon said in his message to the Hiroshima Peace Memorial Ceremony.

He added that security is based on a thriving economy, strong public health and education programmes, and on fundamental respect for our common humanity, and not on military prowess.

“I appeal for universal adherence to the United Nations Charter, which emphasizes peace, disarmament, a prohibition on threats or use of force, and social and economic development,” he said in the message, which was delivered by Noeleen Heyzer, Executive Secretary of the UN Economic and Social Commission for Asia and the Pacific (ESCAP).

Around 50,000 people reportedly gathered in front of the Hiroshima Peace City Memorial Monument to mark a minute of silence, light incense and paper lanterns, and pray near the epicentre of the explosion that took place on 6 August, 1945. The bombing, along with the attack on Nagasaki three days later, killed more than 400,000 people.

Sachiko Matsuo was in fifth grade when her home in Nagasaki was hit. “Suddenly, a very strong, yellowish-whitish light flashed up over there and I was thrown back,” she said in an interview given to the Comprehensive Nuclear-Test-Ban Treaty Organization (CTBTO). “When I came to, I realized I was standing on bare soil with nothing on it, not even grass.

“My oldest sister was only 700 metres away and was buried under the house. When we found her, all that was left of her was white ash.”

The President of the General Assembly, Vuk Jeremic, who attended this year’s Peace Memorial Ceremony in Hiroshima, said he felt privileged to be organizing the first-ever high-level meeting of the Assembly on nuclear disarmament to be held on 26 September.

“I hope this will be a significant step forward in fulfilling our goal to excise atomic weapons, so that the sufferings of Hiroshima and Nagasaki of sixty-eight years ago may never repeat,” Mr. Jeremic said at the ceremony.

Mr. Ban said there is a “surge of new interest” in nuclear disarmament based largely on an increasing awareness of the horrific humanitarian consequences of nuclear weapons.

The UN chief, who has made nuclear disarmament and non-proliferation a top priority, said disarmament frees up resources which could be channelled to address major global threats, including poverty, hunger and disease.

“It can contribute to our efforts to reach the Millennium Development Goals by 2015 and support the realization of a sustainable future for all humankind,” Mr. Ban stated in a separate message to the World Conference against Atomic and Hydrogen Bombs in Hiroshima.

In Geneva, the UN Conference on Disarmament today heard a statement by Japan marking the anniversary of the atomic bombings. Established in 1979 and with a current membership of 65 countries, the Conference has produced landmark disarmament instruments such as the Treaty on the Non-Proliferation of Nuclear Weapons (NPT), the Chemical Weapons Convention and the Comprehensive Nuclear-Test-Ban Treaty (CTBT).

The Executive Secretary of the CTBTO, Lassina Zerbo, said the bombings of Hiroshima and Nagasaki are a “reminder of what horrors nuclear weapons can inflict.”

He added that while nuclear testing allows countries to develop even more powerful nuclear weapons, “the Comprehensive Test-Ban Treaty makes it difficult for countries to proceed with such an endeavour.”

The CTBT bans all nuclear explosions in all environments, for military or civilian purposes. It was adopted by the General Assembly in September 1996 but has not yet entered into force.

Out of a total listed number of 195 States, 183 have so far signed the CTBT and 159 have ratified it. For the treaty to enter into force, ratification is required from the so-called Annex 2 States. Of these, China, the Democratic People’s Republic of Korea, Egypt, India, Iran, Israel, Pakistan and the United States have yet to ratify it. 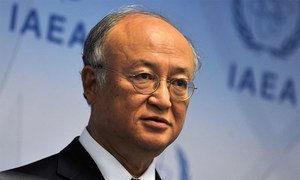