5 August 2013
Secretary-General Ban Ki-moon today held an interactive dialogue with young people across the world and launched an online United Nations Platform for Youth in conjunction with his Special Envoy on this issue.

“Your generation is the largest the world has ever known,” Mr. Ban told young people taking part in the Global Interactive Dialogue on UN Youth Initiatives. “The tools at your disposal for communicating and acting are unprecedented. But so are the challenges – from growing inequalities and shrinking opportunities, to the threats of climate change and environmental degradation.”

Mr. Ban’s Five-Year Action Plan has as one of its priorities working for and with young people. As part of this commitment, Mr. Ban appointed his first ever Envoy on Youth, Ahmad Alhendawi, earlier this year.

“Mr. Ahmad Alhendawi is working with different UN entities, governments, civil society, academia and the media to empower youth within and outside the UN system,” Mr. Ban said, adding that Mr. Alhendawi’s website, launched today, will also serve as an Online Platform for Youth, through which young people can voice their concerns to the UN.

“I am fully committed to working with youth and exploring how you can contribute more to creating a sustainable, equitable future of opportunity and dignity for all,” Mr. Ban said.

He added that Mr. Alhendawi is working with the UN Inter-Agency Network on Youth Development to bring all parts of the UN together under an action plan for youth.

The plan, which is partly based on the My World survey carried out among thousands of youth from around the world earlier this year, focuses on five thematic areas: employment and entrepreneurship; political inclusion; civic engagement and protection of rights; education, including comprehensive sexual education; and health.

Other initiatives include UN youth volunteer programmes and forums where youth can engage with the UN at the national, regional and global levels.

The interactive dialogue also features the Executive Director of the UN Population Fund (UNFPA), Babatunde Osotimehin; the Acting Head of the UN Entity for Gender Equality and the Empowerment of Women (UN Women), Lakshmi Puri; the Special Representative of the International Labour Organization (ILO) on Youth and Social Inclusion, Charles Dan; and the Assistant Secretary-General and Regional Director for Arab States of the UN Development Programme (UNDP), Sima Bahous. 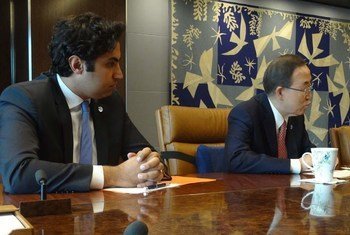 13 June 2013
Secretary-General Ban Ki-moon today issued a call to action for the world’s youth to tackle climate threats, stressing that young people are “agents of change” that bring fresh and innovative ideas to address “this most pressing issue.”