“Based on the analysis by my team to date, we believe armed opposition groups in one incident - documented by a video - executed at least 30 individuals, the majority of whom appeared to be soldiers,” the High Commissioner said in a statement issued by her office.

Ms. Pillay said allegations of the killings after a battle in Khan Al-Assal, a district in rural Aleppo, are “deeply shocking” and reiterated the need to ensure that those responsible for violations of international humanitarian law and international human rights law on all sides of the conflict are made accountable.

Opposition forces in Khan Al-Assal purportedly filmed and posted on the internet between 22 and 26 July a series of videos, one apparently showing Government soldiers being ordered to lie on the ground. Another shows several bodies scattered along a wall and a number of bodies at an adjacent site, according to the Office of the High Commissioner (OHCHR).

“These images, if verified, suggest that executions were committed in Khan Al-Assal,” Ms. Pillay said. “There needs to be a thorough independent investigation to establish whether war crimes have been committed. And those responsible for such crimes should be brought to justice.”

Another video shows bodies being collected by members of the Red Crescent and Free Syrian Army medical doctors, according to the Office of the High Commissioner (OHCHR).

There were several other videos showing the bodies of dead Government soldiers scattered around town, most of whom appeared to have been shot in the head.

“The High Commissioner reminds the parties to the conflict that all persons no longer taking part in hostilities, including captured and wounded soldiers, shall in all circumstances be treated humanely and in accordance with international law,” OHCHR said in today’s statement.

The UN human rights office said it continues to investigate the circumstances and scope of the killings – including reports that the overall number of dead is much higher. According to OHCHR, UN investigators are being allowed to visit Khan Al-Assal as part of a separate probe into three sites in the country to investigate allegations of chemical weapons use.

“Let me also renew my call to the Syrian Government to grant representatives from my Office and the Commission of Inquiry on Syria access to the country, in order to be able to investigate human rights violations, no matter who committed them,” Pillay said.

The events in Khan Al-Assal are further evidence that flagrant violations of international humanitarian and human rights law committed by all parties have tragically become the norm in the Syrian conflict, stressed Ms. Pillay.

“Opposition forces should not think they are immune from prosecution. They must adhere to their responsibilities under international law,” Pillay said.

The Commission of Inquiry on Syria has previously highlighted the emerging patterns of summary execution and murder, perpetrated by anti-Government armed groups, as well as Government forces and affiliated militias.

Established by the UN Human Rights Council in August 2011, the Commission has been mandated to investigate and record all violations of international human rights law during the Syria conflict.

More than 100,000 people have been killed since fighting began between Syrian Government forces and opposition groups seeking to oust President Bashar Al-Assad. Almost 2 million have fled to neighbouring countries and a further 4 million have been internally displaced. 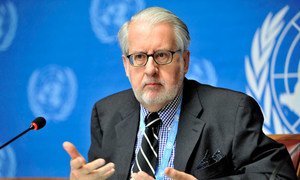