“In every country, in every culture, there is violence against children,” said UNICEF Executive Director Anthony Lake. “Whenever and wherever children are harmed, our outrage and anger must be seen and heard. We must make the invisible visible.”

The End Violence Against Children initiative builds on growing popular outrage that erupted following horrific attacks against children, such as the October 2012 shooting of then 14-year-old Malala Yousafzai in Pakistan, the fatal shooting of 26 pupils and teachers in Newtown, in the United States in December, and gang rapes of girls in India and in South Africa this year.

The initiative urges people around the world to recognize violence against children, join global, national or local movements to end it, and bring new ideas to focus collective action on this goal.

The need to take urgent action is underlined by alarming numbers on violence against children globally. According to the World Health Organization (WHO), some 150 million girls and 73 million boys under 18 years experienced sexual violence and exploitation, and an estimated 1.2 million children are trafficked every year, according to a 2005 report by the International Labour Organization (ILO).

Violence inflicts not only physical wounds but leaves mental scars on children, affecting their physical and mental health and compromising their ability to learn and socialize.

The initiative was unveiled today with a video narrated by UNICEF Goodwill Ambassador Liam Neeson, who leads viewers through scenes depicting invisible violence.

A special website and a social media campaign will outline ways for children, parents and communities to take action – such as getting involved, getting informed, organizing events and public discussion forums, supporting child victims of violence and working with global and local UNICEF partners. 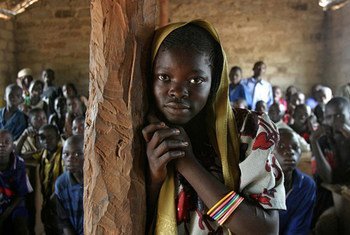 12 July 2013
Classrooms, teachers and pupils will continue to be seen as legitimate targets unless there is tougher action against human rights violations, an overhaul of global aid priorities and strengthened rights for displaced people, a new report by the United Nations educational agency warns, urging action on behalf of 28 million children out of school in the world's conflict zones.