Marking the International Day of Friendship, United Nations Secretary-General Ban Ki-moon today urged the global community to use the potential of friendship to strengthen common bonds and inspire efforts for peace and sustainable development.

Marking the International Day of Friendship, United Nations Secretary-General Ban Ki-moon today urged the global community to use the potential of friendship to strengthen common bonds and inspire efforts for peace and sustainable development.

“The International Day of Friendship is an important opportunity to confront the misunderstandings and distrust that underlie so many of the tensions and conflicts in today’s world,” the Secretary-General said in his message for the Day.

He added that the Day – marked for a third time since it was created in 2011 - is a “reminder that human solidarity is essential to promoting lasting peace and fostering sustainable development.”

This year, the Day falls amid the 1,000 days of action to reach the 2015 deadline for the eight anti-poverty targets known as the Millennium Development Goals (MDGs). Ranging from providing universal primary education to halving extreme poverty rates, the MDGs embody basic human rights and have been universally agreed upon by all world leaders.

In his message, Mr. Ban urged the international community to “cultivate warm ties that strengthen our common humanity and promote the well-being of the human family”.

The UN Charter proclaims that one of the Organization’s purposes is “to develop friendly relations among nations,” words that also appear in the preamble to the Universal Declaration of Human Rights.

The constitution of the UN Educational, Scientific and Cultural Organization (UNESCO) also stressed the need for peace based not only on the political and economic arrangements of Governments, but on the intellectual and moral solidarity of mankind.

Three children in Akko, Israel, draw together and smile for the photographer’s camera. (UN Photo/John Isaac)

Two of the participants at the International Day of the World’s Indigenous People at the United Nations, New York. (UN Photo/Evan Schneider)

A view of indigenous children from the Embera people in Rio Suchio, Colombia, displaced by armed conflict. (UN Photo/Mark Garten)

Children at Delmas 33 camp for displaced Haitians in Port-au-Prince, Haiti, play inside a clean, safe area designated by independent organization Save the Children. (UN Photo/Sophia Paris)

The resolution creating the International Day of Friendship was adopted unanimously by the UN General Assembly in May 2011 in recognition of the fact that friendship can contribute to the efforts of the world community to promote dialogue among civilizations, solidarity, mutual understanding and reconciliation.

The resolution invites all UN Member States, bodies of the UN system and other international and regional organizations, as well as civil society, to observe the Day in accordance with the culture and other appropriate circumstances or customs of their local, national and regional communities, including through education and public awareness-raising activities. 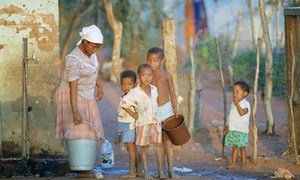 Senior United Nations officials today emphasized that the international community must tackle social and economic inequalities between regions and within countries, adding that this is crucial to achieve sustainability and avert future crises.