FAO/Asim Hafeez
Highly hazardous pesticides should be phased out because it has proven very difficult to ensure proper handling.
30 July 2013

The tragic incident in India in which nearly two dozen children died after eating a contaminated school meal is a stark reminder that highly hazardous pesticides should be phased out in developing countries, the United Nations Food and Agriculture Organization (FAO) said today.

On 17 July, 23 children in the village of Dharmasati Gandawa in the eastern state of Bihar died after eating a free school lunch that was made with cooking oil tainted with the monocrotophos pesticide. This substance is widely used in India in spite of being described as having “high acute toxicity” by FAO and the World Health Organization (WHO).

In a news release, FAO stressed that the distribution and use of highly toxic pesticides in many developing countries poses a serious risk to human health and the environment, and measures to put safeguards in place to protect the population must be implemented.

“The incident in Bihar underscores that secure storage of pesticide products and safe disposal of empty pesticide containers are risk reduction measures which are just as crucial as more prominent field-oriented steps like wearing proper protective masks and clothing,” FAO said.

For monocrotophos, many governments have concluded that prohibition is the only effective option to prevent harm to people and the environment. This pesticide has been banned in Australia, China, the European Union and the United States, and in many countries in Africa, Asia and Latin America.

“There is consensus that highly hazardous products should not be available to small-scale farmers who lack knowledge and the proper sprayers, protective gear and storage facilities to manage such products appropriately,” FAO said, recommending that governments in developing countries speed up the withdrawal of highly hazardous pesticides from their markets and switch to non-chemical and less toxic alternatives.

FAO also recalled the International Code of Conduct on Pesticide Management, which was adopted by its member countries and establishes voluntary standards for public and private entities involved in pesticide management.

The Code, which has been broadly accepted as the main reference for responsible pesticide management, states that prohibiting the importation, distribution, sale and purchase of highly hazardous pesticides may be considered if risk mitigation measures or good marketing practices cannot ensure that the product can be handled without unacceptable risk to humans and the environment.

♦ Receive daily updates directly in your inbox - Subscribe here to a topic.
♦ Download the UN News app for your iOS or Android devices.
hazardous|chemical 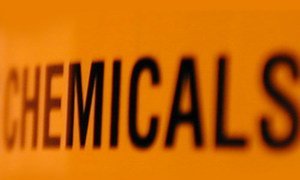 Governments must urgently act to reduce the health and environmental hazards posed by the increase in use of chemicals in industries worldwide, says a United Nations report launched today, which stresses that more sustainable management policies are needed to address this growing risk.