A United Nations independent expert today welcomed Myanmar’s latest release of prisoners of conscience, but raised concerns over ongoing arrests of activists in the country.

“The release of prisoners of conscience continues to be one of the most tangible outcomes of Myanmar’s reforms. However, I am very concerned about ongoing arrests and sentencing,” said the Special Rapporteur on the human rights situation in Myanmar, Tomás Ojea Quintana.

While commending the Government for its recent actions, Mr. Ojea Quintana said the Government should stop arresting citizens for their politics and expressions of dissent with current policies.

“I believe there are still arrests and trials taking place that are politically motivated, including individuals involved in protests against land confiscation as well as people working to defend human rights in Rakhine state,” he said. “I intend to follow up on these cases during my upcoming mission to Myanmar next month.

Mr. Ojea Quintana noted that addressing this issue involved reforming laws such as the Peaceful Assembly and Peaceful Procession Act and the Unlawful Associations Act, as well as the development of an independent judiciary in Myanmar.

“I also hope that the new prisoner review committee becomes more transparent in the important work it is doing, including with regard to the criteria used to determine prisoners of conscience,” he said, adding that the committee should also be able to investigate new cases that may be politically motivated and recommend necessary institutional and legislative reforms. 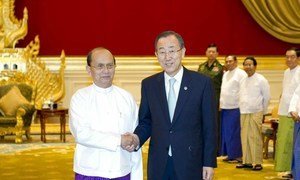 Secretary-General Ban Ki-moon welcomed the release of 73 political prisoners in Myanmar yesterday, as well as the announcement by the country’s leader that the rest will be freed by the end of the year.