Secretary-General Ban Ki-moon today strongly condemned the deadly upsurge of violence in Egypt and called on security forces to respect the right to free speech and assembly while urging protesters to demonstrate peacefully.

Protests on Friday and Saturday have left scores of people dead and hundreds others injured.

“The Secretary-General once again calls on the interim authorities to assume full responsibility for the peaceful management of the demonstrations and ensure the protection of all Egyptians,” Mr. Ban's spokesperson said in a statement.

He added that Egypt's security forces must act with full respect for human rights, including guaranteeing the rights to free speech and assembly.

Mr. Ban also urged demonstrators to exercise restraint and preserve the peaceful nature of their protests.

“The Secretary-General appeals to all the people of Egypt to address their differences through dialogue and again renews his calls to all parties to engage in an inclusive and meaningful reconciliation process,” according to the statement.

Mr. Ban underlined that violence is not a substitute for a political solution and, therefore, “calls on all Egyptian leaders to put the interest of Egypt above all individual, group and political interests.”

The crisis in the country escalated earlier this month, resulting in the Egyptian military deposing President Mohamed Morsi amid widespread protests in which dozens of people were killed and wounded. The Constitution was then suspended and an interim government set up.

Mr. Morsi and Muslim Brotherhood leaders currently in detention should immediately be released or have their cases reviewed in full transparency, Mr. Ban urged in the statement.

He also expressed his deepest condolences to the families of the victims in the latest round of protests and wished the wounded a speedy recovery.

Yesterday, UN High Commissioner for Human Rights Navi Pillay stressed that it is extremely important that security forces in Egypt do not resort to excessive use of force, and that her office would be closely following how the situation develops. 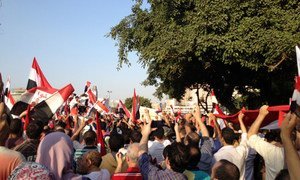 Secretary-General Ban Ki-moon and the United Nations human rights chief have voiced growing concern about developments in Egypt and called on authorities to ensure respect for the rule of law and international human rights standards.