In a bid to make sanitation for all a global development priority, the United Nations General Assembly today designated 19 November as World Toilet Day, urging changes in both behaviour and policy on issues ranging from enhancing water management to ending open-air defecation.

Adopting a new resolution, the Assembly urged UN Member States and relevant stakeholders to encourage behavioural change and the implementation of policies to increase access to sanitation among the poor, along with a call to end the practice of open-air defecation, which it deemed “extremely harmful” to public health.

“This new annual observance will go a long way toward raising awareness about the need for all human beings to have access to sanitation,” said UN Deputy Secretary-General Jan Eliasson in a statement issued immediately following the Assembly’s action.

The resolution also recognizes the role that civil society and non-governmental organizations play in raising awareness of this issue. It also calls on countries to approach sanitation in a much broader context that includes hygiene promotion, the provision of basic sanitation services, and sewerage and wastewater treatment and reuse in the context of integrated water management.

“Despite progress toward the Millennium Development Goals, one in three people do not have a basic toilet,” Mr. Eliasson said. “Almost 2,000 children die every day from preventable diarrhoeal diseases. Poor sanitation and water supply result in economic losses estimated at $260 billion annually in developing countries.”

He added that sanitation is also a question of basic dignity, and underlined that women should not risk being victims of rape and abuse because of lack of access to a toilet that offers privacy.

“It is also unacceptable that many girls are pushed out of school for lack of basic sanitation facilities,” he said. “I urge every country to accelerate progress towards a world in which everyone enjoys this most basic of rights.”

World Toilet Day has previously been marked by international and civil society organizations all over the world. However, it was not formally recognized as an official UN day until today. 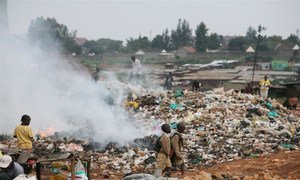 United Nations Deputy Secretary-General Jan Eliasson today launched a call for urgent action to end the crisis of 2.5 billion people without basic sanitation, and to change a situation in which more people worldwide have mobile phones than toilets.