UNICEF/Kate Holt
At age one, Fatima was subjected to female genital mutilation/cutting (FGM/C) in her village in Afar Region of Ethiopia which has one of the world’s highest prevalence rates.
22 July 2013

The report, Female Genital Mutilation/Cutting: A statistical overview and exploration of the dynamics of change, surveyed 29 countries in Africa and the Middle East, where FGM/C persists, and found that while support for the practice is in decline, girls remain in considerable danger.

The report points to a gap between people’s personal views on FGM/C and the entrenched sense of social obligation that fuels its continuation, exacerbated by a lack of open communication on this sensitive issue.

There are currently 125 million girls and women alive today who have been subjected to FGM/C, which refers to a number of practices which involve cutting away part or all of a girl’s external genitalia. The practice – recognized globally as a violation of the human rights of girls and women – has no health benefits, causes severe pain and has several immediate and long-term health consequences, according to UN agencies.

“FGM/C is a violation of a girl’s rights to health, well-being and self-determination,” said UNICEF Deputy Executive Director Geeta Rao Gupta. “What is clear from this report is that legislation alone is not enough. The challenge now is to let girls and women, boys and men speak out loudly and clearly and announce they want this harmful practice abandoned.”

The report’s surveys found that not only are most girls and women against the practice, but that a significant number of men and boys also oppose FGM/C. In three countries – Chad, Guinea and Sierra Leone – more men than women want the practice to end.

While FGM/C has been virtually abandoned by certain groups and countries, it remains entrenched in many others, even where there is legislation against it and efforts by governments and non-governmental organizations to convince communities to stop.

FGM/C remains almost universal in Somalia, Guinea, Djibouti, and Egypt, with more than nine out of 10 women and girls aged 15-49 being cut. In countries such as Chad, Gambia, Mali, Senegal, Sudan, or Yemen, there has been no discernible decline.

By contrast, the practice has declined in Kenya, Tanzania, Benin, Iraq, Liberia, Nigeria, and the Central African Republic.

While noting that legislation against FGM/C is a welcome development, the report calls for measures to complement it, such as positive social dynamics that change the social norms to accelerate the decline of this practice.

It recommends opening up FGM/C to greater public scrutiny, to challenge the misperception that “everyone else” approves of the practice. It also highlights the role education can play in bringing further social change, noting that higher levels of education among mothers correspond to a lower risk that their daughters will be cut and that while in school, girls may develop ties with others who oppose FGM/C.

Some of the key steps outlined in the report include finding ways to make visible the hidden attitudes that favour the abandonment of FGM/C, increasing exposure of groups that still follow the practice to those that do not, and promoting the rejection of FGM/C alongside improved opportunities for girls.

Since 2008, nearly 10,000 communities in 15 countries, representing about 8 million people, have renounced the practice. In December 2012, a UN General Assembly resolution called on Member States to intensify efforts toward the complete elimination of FGM/C. In addition, some 1,775 communities across Africa publicly declared their commitment to end the practice last year.

♦ Receive daily updates directly in your inbox - Subscribe here to a topic.
♦ Download the UN News app for your iOS or Android devices.
women|health 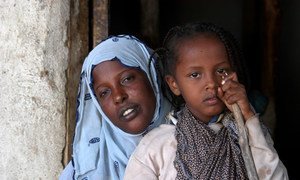