Respect for human rights will be critical as Colombia transitions from conflict to peace, a top United Nations official stressed, noting in particular that the rights of victims must be at the centre of the Government's negotiations with rebel groups.

“It will not be easy to create a society that respects each other's rights after years of conflict,” High Commissioner for Human Rights Navi Pillay said yesterday at a news conference in the capital, Bogotá, at the end of her mission.

The Government estimates that 600,000 people have died since the conflict between the country's authorities and the Revolutionary Armed Forces of Colombia (FARC) began in the 1960s. Recently, the two sides have been engaged in negotiations on various issues in an effort to put an end to the long-running conflict.

“Today, I am visiting a Colombia that still faces many human rights challenges, but is beginning to look to the future with optimism,” said Ms. Pillay, who last visited the country five years ago.

This week she met with President Juan Manuel Santos, who reaffirmed his commitment to transform the human rights situation and to achieve peace, as well as other senior Government officials and representatives of civil society, human rights defenders, victims, the Church and the private sector.

“It was clear, from my discussion with the President and several high-level officials, that they understood that human rights obligations are central to the peace process. I stressed that the rights of the victims need to be at the centre of the peace negotiation with the FARC and I hope soon with the ELN,” she said, referring to another armed group, the National Liberation Army.

Ms. Pillay stressed that the goal is to achieve both peace and justice so all Colombians stand to benefit from the peace process.

“Regardless of the status of the perpetrators, either State forces, guerrillas, paramilitary or post-paramilitary groups, crimes related to human rights violations cannot be subject to amnesties or impunity. This is not only Colombia's international obligation – it is what the people of Colombia deserve.”

The High Commissioner recalled that restorative justice and other mechanisms of transitional justice have brought peace in many countries. This means there are stronger guarantees that violations are not repeated; that there are efforts to restore the rights of victims and transform their lives for the better; and truth is revealed and reparations are granted to victims.

“It won't be easy,” she stated. “A peace accord is only the first phase. What really matters is how the peace accords are implemented; how violations will stop and not be repeated; how peace will improve the rights to political participation, health and education; and how it will reduce the poverty and extreme poverty. This is why the human rights must be at the centre of the peace process.”

She commended the peace process and the programmes put together by Mr. Santos which are aimed at providing reparations and restoring the rights of some five million victims. While there will be many difficulties in implementing such an “ambitious” plan, she stressed that reparation is fundamental to a sustainable peace based on the respect of the rights of the victims.

Land restitution is key, she added, given the number of people who were forced off their land during the armed conflict.

She also highlighted the need to ensure that everyone has an opportunity to make their voice heard in the peace discussions on issues that directly affect them; to urgently address the “huge disparities” in economic, social and cultural rights; and to ensure that there is no impunity for rights violations committed during the conflict.

Ms. Pillay's four-day mission also included a visit to the state of Cauca, where she met representatives of indigenous peoples, Afro-Colombian communities and small farmers' groups, as well as local government officials. She voiced concern about reports of civilian casualties, of people being killed or injured by landmines, and displaced by violence in the region, where both Government military forces and FARC members have been present.

She lauded the work and courage of the human rights defenders whom she met during the visit. “Defenders in Colombia often work under pressure and at great risk. They are a fundamental pillar of democracy, as they are the voice of victims and remind the State of its obligations,” she noted. 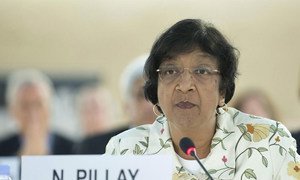