Children and Armed Conflict
SRSG Leila Zerrougui on a field mission to Syria in December 2012.
18 July 2013

Children will continue to suffer the consequences of the ongoing conflict in Syria unless an urgent political solution is found, a top United Nations child rights official stressed today, citing reports of the use of children as combatants, the arbitrary arrest and detention of children, and the denial of education as schools continue to come under attack.

Children will continue to suffer the consequences of the ongoing conflict in Syria unless an urgent political solution is found, a top United Nations child rights official stressed today, citing reports of the use of children as combatants, the arbitrary arrest and detention of children, and the denial of education as schools continue to come under attack.

“Everyone I spoke with, both inside and outside Syria, has shared personal stories about the impact of the conflict on children and their families, said the Special Representative of the Secretary-General for Children and Armed Conflict, Leila Zerrougui, who wrapped up a visit to Syria, Jordan, Iraq, Turkey, and Lebanon.

“I have met with parents whose children died in bombings, children who have seen their brothers and sisters killed in front of them and children who are recovering from wounds so severe that I wondered how they could have survived,” she stated in a news release.

During her visit, the Special Representative met with Government officials and had contacts with members of opposition groups. She urged all parties to take urgent measures to protect children and civilians.

“All parties must stop the shelling and use of explosive weapons in populated areas, as well as terror attacks,” she stated.

Since fighting began in March 2011 between the Syrian Government and opposition groups seeking to oust President Bashar Al-Assad as many as 100,000 people have been killed, almost 2 million have fled to neighbouring countries and a further 4 million have been internally displaced.

Inside Syria, 6.8 million people require urgent humanitarian assistance, half of whom are children.

While in the country, Ms. Zerrougui met children and women who have been displaced, several times over several months, and whose survival depends on the humanitarian assistance they receive.

“Safe and impartial delivery of humanitarian assistance – that is so critically needed – must be guaranteed by all parties. Civilians must not be taken hostage by belligerents,” she stated.

She also encouraged authorities to enforce the recent law adopted by the Government of Syria forbidding the recruitment and use of children under 18. She added that she continues to receive information that some armed opposition groups are using children as combatants and in auxiliary roles, despite assurances from some local commanders that they would not accept under-age fighters.

The Special Representative also voiced concern at children continuing to be detained by Syrian authorities on security charges, or suspicion that they or their families are sympathizing with the opposition. Similarly, opposition groups are also detaining children.

“I have received reports that in detention, children are mistreated and tortured, or detained in degrading conditions. Families are without news of their relatives,” she said. “I have reminded authorities to immediately bring all children detained before a judge to assess the lawfulness of their detention, or release them, separate them from adults and treat them, under all circumstances, with dignity.”

Among other issues, she cited the continued attacks on schools which have been bombed, used as military barracks, prisons or simply closed because of the insecurity. Thousands of children, inside Syria and in neighbouring countries, have been out of school for months, or even years. Considerable efforts have been deployed by Governments, the UN and non-governmental organizations (NGOs) to help children go back to school, but more needs to be done.

“Education is one of the most effective ways to build an inclusive and open society,” Ms. Zerrougui repeated to Governments and partners during her mission. “We cannot allow the next generation of Syrians to be illiterate.”

She stressed the need to for accountability and ending impunity, noting that scores of grave violations are committed on a daily basis against children in Syria. 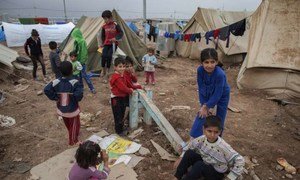