Presenting Secretary-General Ban Ki-moon's latest report on the West African country, Mr. Ladsous praised President Alassane Outtara and his Government for taking “signing steps” to tackle many of the challenges facing the country. Among these, he noted the disarmament, demobilization and reintegration of some 65,000 former combatants.

He cautioned, however, that the former combatants “could become a threat to human rights and stability in Ivory Coast and the sub-region, as they are more likely to pick up arms again should the opportunity arise.”

Summarizing the other key aspects of the report, Mr. Ladsous called on all Ivoirians to resolve their political difference peacefully and stressed his concern over the country's political fragmentation.

In the report, Mr. Ban said: “I therefore urge the Government and the former ruling party to resume discussions, while continuing dialogue with other parties, to pave the way for the political reconciliation that will be essential as we move towards a new electoral cycle in 2015.” He also notes the upcoming presidential and legislative elections will be a “litmus test for the country.”

Côte d'Ivoire's 2010 presidential election, meant to be the culminating point in a long-running UN peace process, resulted in months of violence when former President Laurent Gbagbo refused to step down after losing to Alassane Ouattara. Mr. Gbagbo finally surrendered the following April.

In a key milestone earlier this year, the country successfully held regional and municipal elections. These demonstrated the ability of national authorities and security forces to assume responsibility for organizing the safeguarding the voting process and the commitment of citizens to the democratic process, the report noted commending the vote.

In his summary of Mr. Ban's report, Mr. Ladsous noted the positive work of the Dialogue, Truth and Reconciliation Commission which is due to end in September. He urged officials to promote further efforts to combat impunity to ensure that those responsible for serious violations of human rights and international humanitarian law be brought to justice irrespective of their political affiliation.

Security – while improved – remains a concern for the country, particularly along the border with Liberia. During a quadripartite meeting in April, the two Governments agreed to enhance their presences at the border area and to take steps to strengthen security and reinforce humanitarian coordination. These efforts are supported by UNOCI and the UN Mission in Liberia (UNMIL).

Other threats detailed by Mr. Ladsous include the presence of mercenaries, former combatants and other armed elements; the uncontrolled circulation of weapons; criminal activities; and, violence between communities remain of concern, as well as piracy in the Gulf of Guinea, drug trafficking and organized crime.

The UN peacekeeping chief praised UNOCI's efforts to enhance protection of civilians, including through increased civilian field presence and contacts with local authorities.

Mr. Ladsous also noted that while the Secretary-General's report proposed benchmarks to measure the country's progress towards long-term stability and to prepare for a potential transition, “it is still too early to predict when UNOCI will start its transition.” 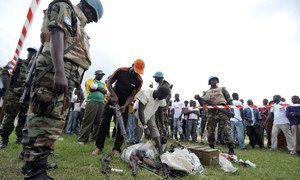 The United Nations peacekeeping mission in Côte d'Ivoire today strongly condemned an attack on a disarmament convoy carrying its national authority head, and urged that those responsible be brought to justice.