A group of independent United Nations human rights experts have called on Italian authorities to facilitate the return to Italy of Alma Shalabayeva, a Kazakh national, and her six-year-old daughter who were unlawfully deported to Kazakhstan in May.

A group of independent United Nations human rights experts have called on Italian authorities to facilitate the return to Italy of Alma Shalabayeva, a Kazakh national, and her six-year-old daughter who were unlawfully deported to Kazakhstan in May.

Ms. Shalabayeva is married to former political prisoner Mukhtar Ablyazov, who is an opponent of Kazakhstan's President, Nursultan Nazarbayev, according to a news release issued by the experts. He was granted political asylum in the United Kingdom in 2011 but fled after UK police warned him his life was in danger.

Ms. Shalabayeva and her daughter were legal residents in the European Union and living in Italy when they were expelled on 31 May of this year.

François Crépeau, Juan E. Méndez and Gabriela Knaul, the UN experts on the rights of migrants, torture and independence of the judiciary, respectively, said the actions of the Italian authorities had violated guarantees of due process and deprived Ms. Shalabayeva of her right to appeal against deportation and to apply for asylum.

“The circumstances of the deportation give rise to the appearance that this was in fact an extraordinary rendition which is of great concern to us,” they stated.

The authorities also appeared to have ignored concerns that Ms. Shalabayeva might be at risk of being persecuted, tortured or subjected to other forms of ill-treatment upon her forcible return to Kazakhstan due to her husband's political activities.

“We are encouraged to see that Italy has now publicly recognized that the deportation of Ms. Shalabayeva and her daughter was unlawful and unacceptable,” said the UN experts on the rights of migrants, torture and independence of the judiciary,” the experts said.

They welcomed the decision to officially revoke the deportation order and the announcement that investigations were under way to determine responsibility for the illegal expulsion.

“We appreciate the Italian authorities' commitment to carry out thorough investigations on the case and welcome the developments thus far,” the experts said. “We urge both Italy and Kazakhstan to continue to investigate and hold those responsible accountable.”

Italy is a State party to many international treaties which prohibit the expulsion, refoulement or extradition of a person to a State where it is feared he or she would be at risk of persecution and/or torture or cruel, inhuman or degrading treatment.

“Given the possible serious implications of this case, we call upon both the Italian and Kazakh authorities to cooperate and reach a diplomatic agreement to facilitate the rapid return of the deportees,” the experts said.

♦ Receive daily updates directly in your inbox - Subscribe here to a topic.
♦ Download the UN News app for your iOS or Android devices.
kazakh 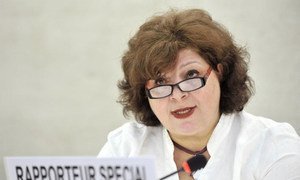 A new law which complicates the process for labourers to acquire work permits in Kazakhstan risks reversing recent gains made by the Central Asian country in its fight against slavery, a United Nations human rights expert warned today.