UNHCR/J. Tanner
Young Omar and his parents, who fled the Syrian city of Idlib and crossed into Turkey, have been accepted for resettlement in France.

18 July 2013
The United Nations refugee chief today voiced concern about serious gaps in the protection of Syrians who are fleeing the conflict in their country and arriving in Europe, and urged a more generous and consistent approach as they seek shelter and asylum.

The United Nations refugee chief today voiced concern about serious gaps in the protection of Syrians who are fleeing the conflict in their country and arriving in Europe, and urged a more generous and consistent approach as they seek shelter and asylum.

“Syrians are fleeing one of the worst conflicts the world has seen in decades, and many of them have been subjected to unspeakable human rights violations and persecution in their home country,” António Guterres said in remarks to a meeting in Lithuania of the European Union's Justice and Home Affairs Council.

“Ensuring adequate standards of treatment for them as they seek safety in Europe should be a priority for every EU member state,” he added.

Mr. Guterres noted that just two European countries – Germany and Sweden – had received nearly two-thirds of the Syrians seeking protection in the entire EU. He urged more countries to help Syria's neighbours shoulder the burden and to offer asylum or resettlement, saying: “A positive example from Europe is now crucial.”

According to the UN High Commissioner for Refugees (UNHCR), the agency headed by Mr. Guterres, the number of Syrian asylum claims in EU countries remains manageable, standing at slightly more than 40,000 since the beginning of the crisis in March 2011. This compares to Syria's neighbours, who are providing shelter to almost 1.8 million registered Syrian refugees.

“As the exodus continues and prospects for a political solution for Syria remain poor, there are warning signs of destabilization in some neighbouring countries . . . Lebanon continues to keep its borders open, but elsewhere in the region access to safety is becoming more difficult for Syrians trying to flee,” Mr. Guterres warned.

This was “the first real test” to show that the Common European Asylum System (under development since 1999) can function as it should, he said, while citing flaws and inconsistencies in asylum policy across Europe.

He said recognition rates varied greatly across the EU; too many States fail to provide swift and fair access to asylum procedures for Syrians; the types of protection and associated rights which Syrians are granted across the EU are inconsistent; and the treatment of Syrian asylum-seekers needs to be improved in several member States, including excessive use of detention.

Mr. Guterres also highlighted the case of Turkey, which has received more than 10 times as many Syrians as have claimed asylum in other countries in Europe.

“While the management of borders is a sovereign right and legitimate priority of States, the means must be found to ensure that Syrians seeking protection at the EU's frontiers can gain access to territory, procedures and safety. This is crucial in order to demonstrate concretely the European commitment to responsibility-sharing with Turkey and other host countries,” he said.

The High Commissioner proposed five key steps that the EU should take, beginning with ensuring access to territory and swift and fair asylum procedures for those seeking protection, notwithstanding the ongoing efforts to improve border control at sensitive external EU frontiers.

Second, a more consistent and generous approach to protection is needed, particularly as concerns the recognition rates and the forms of protection that are being awarded to Syrian claimants.

“As the conflict is unlikely to end soon, UNHCR hopes to see protection rates increasing across Europe, and in particular the granting of refugee status with its associated rights,” he said.

He also called for more flexibility in the use of existing measures, including helping to reunite family members already in Europe by flexibly applying the Dublin Regulation [which determines the European State responsible to examine an asylum application within Europe until a decision has been made]; dispensing with visa requirements; and facilitating the entry of Syrians for work, study, family or humanitarian purposes.

Mr. Guterres encouraged EU States to establish strict limits and safeguards on the use of detention, explore alternatives to detention, and do more to improve the conditions for asylum-seekers who are awaiting decisions on their protection claims.

“The EU must engage in more burden-sharing initiatives so as to help mitigate the crushing impact which the refugee crisis is having on Syria's immediate neighbours,” he added.

As many as 100,000 people have been killed since fighting began in March 2011 between the Syrian Government and opposition groups seeking to oust President Bashar Al-Assad. The UN estimates that currently at least 6.8 million Syrians require urgent humanitarian assistance, half of whom are children. 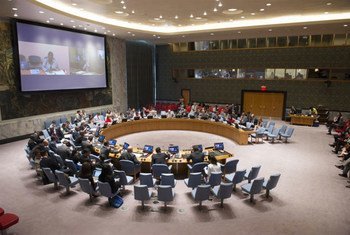 16 July 2013
With war-ravaged Syria at risk of sliding deeper into fragmentation and chaos as serious human rights violations and war crimes have become routine, senior United Nations officials today urged the Security Council and the wider international community to “come together to put an end to the bloodshed.”