With journalists working in dangerous corners of the world being thrown in prison or murdered in record numbers, the Deputy Secretary-General joined veteran reporters today urging the United Nations Security Council to stand up against all acts to suppress media freedom wherever and whenever they occur.

With journalists working in dangerous corners of the world being thrown in prison or murdered in record numbers, the Deputy Secretary-General joined veteran reporters today urging the United Nations Security Council to stand up against all acts to suppress media freedom wherever and whenever they occur.

“When journalists are killed, information about threats to international peace and security is often buried,” Deputy Secretary-General Jan Eliasson told the Council in a special meeting devoted to the protection of journalists in armed conflict. He added that the 15-member body may wish to consider the targeting of journalists and other threats to freedom of expression when addressing situations on its agenda.

Every time a journalist is killed or intimidated into silence, “there is one less voice to speak on behalf of the victims of conflict, crime and human rights abuses…one less observer of efforts to uphold rights and ensure human dignity,” said Mr. Eliasson.

Those providing often chilling accounts of the dangers they and their colleagues faced in the field included Kathleen Carroll, Associated Press executive editor and vice chair of the board of the Committee to Protect Journalists (CPJ), Richard Engel of NBC News, Ghaith Abdul-Ahad from the Guardian, and Mustafa Haji Abdinur of AFP, a self-taught reporter working in Somalia, who told the Council sombrely: “I'm here simply because I'm lucky; because the gunmen who have killed so many of my friends have not yet found me. Still, it's not a matter of if, but when.”

Mr. Eliasson said that in the past decade, more than 600 journalists have been killed, the majority local journalists and media staff often reporting on corruption and other illegal activities. It is “shocking and unacceptable” that more than 90 per cent of the assassinations on journalists go unpunished, he noted, urging that “the least we can do when a journalist is murdered, is to ensure that the death is investigated swiftly and justice is served.”

The UN Plan of Action on the Safety of Journalists and the Issues of Impunity aims to create a free and safe environment for journalists and media workers, both in conflict and non-conflict situations, as a prerequisite for freedom of expression and democracy. The Plan was approved in April 2012 by the UN Chief Executives Board and led by the UN Educational, Scientific and Cultural Organization (UNESCO).

A multi-dimensional, multi-actor approach, the Plan requires cooperation from Governments – particularly through Ministries of Information, academia, as well as media houses and civil society to conduct awareness about threats to journalists.

Mr. Eliasson encouraged all UN entities to submit information which could contribute to journalists' greater safety.

Stressing the importance of freedom of expression, Mr. Eliasson highlighted that the fundamental human right at the heart of journalistic work is in the report of the Secretary-General's High Level Panel of Eminent Persons on the Post-2015 Development Agenda. The report aimed to outline a new framework building on the eight anti-poverty targets known as the Millennium Development Goals (MDGs).

In her remarks, Ms. Carroll stressed that journalists represent the ordinary citizen. “An attack on a journalist is a proxy for an attack on the people, an attack on their right to information about their communities and their institutions.”

Citing CPJ figures, she noted that 5 in 6 murdered journalists are killed in their own hometowns covering local stories, often related to crime and corruption, and that 90 per cent of the cases go unpunished.

Mr. Engel argued that protecting journalists is harder than ever because of the blurred delineation between who is a journalist and an activist.

“If the discussion today is about protection journalists, you have to decide who gets protection? Who deserves it? And who forfeits it,” Mr. Engel asked, noting that professional journalists for State and private media, as well as freelancers who join rebel groups and carry guns, are often lumped in the same category.

“We're all troublemakers,” Mr. Engel said stressing how journalists are perceived by Governments. “The guild of professionals isn't recognized anymore. It should be. Just like you in the diplomatic community need protection to be objective. If you want professionals who are also objective we need protection as well.”

Saying that war-time reporters were often referred to as “dead men walking”, Mr. Abdinur said that scores of journalists had been killed covering the decades-long conflict in Somalia. He longed for the day when the perpetrators of such crimes were prosecuted and punished, as the vast majority of perpetrators today continued to kill with impunity.

“When a journalist is killed, the news dies too,” he said. The question today was, how long could that bravery continue? Indeed, “we are few remaining.” The Council's discussion today would play an important role in answering that question, and in helping to encourage States to support journalist. In the meantime, the work of telling the truth would continue. “We will not fail the dream, we will never be discouraged.”

For his part, Mr. Abdul-Ahad echoed many of the same sentiments, saying there is a sense of immunity for all those who captured journalists; they were never questioned and they never paid for it. That created a sense that professional journalists were “asking” for trouble just by being on a particular scene. “But we have to be there; we are telling the story,” he said.

“We would happily be sitting in our countries and writing from our desks,” he said, but by covering conflicts today, journalists became part of them. When he had been detained in Afghanistan and Libya, certain groups helped with his release, but other reporters had been left behind. Professional journalists were part of a community of informers who deserved protection. If the Security Council could do more to recognize journalists as a part of a “humanitarian effort to tell a story”, perhaps the 15-member body could foster their protection, he suggested. 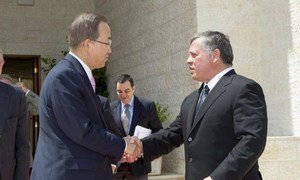 The deadly violence in Egypt, the ongoing Syria crisis and the Israeli-Palestinian peace process were on Secretary-General Ban Ki-moon’s agenda as he arrived today in the Middle East, where he held talks with leaders in Jordan as well as with Palestinian officials in Ramallah, before heading to Israel.