16 July 2013
A United Nations independent expert today welcomed the abolition of Myanmar’s notorious border security force, known as Nasaka, and called for an investigation of human rights abuses committed by its members against the Rohingya population in Rakhine state.

“I have received allegations of the most serious of human rights violations involving Nasaka, particularly against the local Rohingya population, including extrajudicial killings, arbitrary arrest and detention, and torture in detention,” said the Special Rapporteur on the human rights situation in Myanmar, Tomás Ojea Quintana.

“I have no doubt that the violations committed over the years with complete impunity have undermined the rule of law in Rakhine state, and had serious consequences for the peaceful coexistence of communities there.”

Mr. Ojea Quintana stressed that the abolition of Nasaka should not mean that credible allegations of widespread human rights violations by its members should be ignored, and called on the Government to hold the perpetrators to account.

“Furthermore, whatever force takes the place of Nasaka, it is vital that the issue of impunity is addressed,” he said. “If the new force is not held accountable for its conduct, then the Government will not have addressed the underlying problem.”

The independent expert had previously called on the Government to suspend all Nasaka’s operations in Rakhine state and introduce reforms to the border security force, noting that its current activities discriminated against vulnerable and marginalized groups in Myanmar.

The vast majority of the 800,000 Rohingya Muslims in Rakhine are without citizenship and are stateless, making them extremely vulnerable to human rights violations.

Mr. Ojea Quintana also urged reforms of the discriminatory laws and regulations which Nasaka used to extort money from the local Rohingya population, including with regard to marriage permits, freedom of movement, registration of newborn children, and access to education and employment.

“Reform of discriminatory laws needs to accompany institutional reform, in line with the country’s national reform efforts,” he said. “How the Government deals with the situation in Rakhine state is a good indicator of the depth and commitment of its efforts at the national level to bring democracy, respect for human rights and national reconciliation to the people of Myanmar.” 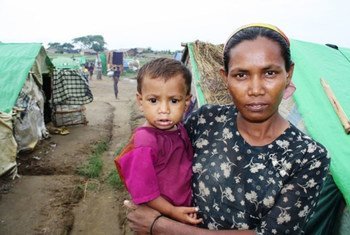