UNAMID/Saidi Msonda
Remains of peacekeepers killed in ambush in South Darfur are prepared for repatriation to their home country of Tanzania.

In a statement, Mr. Ban's spokesperson said the Secretary-General was “outraged to learn of a deadly attack on peacekeepers […]” and said he expects the Government of Sudan will take swift action to bring the perpetrators to justice.

In a news release, the joint African Union-United Nations Mission in Darfur (UNAMID) said this morning one of its patrols was ambushed and came under heavy fire from a large unidentified group approximately 25 kilometres west of the Mission's Khor Abeche team site.

Following an extended firefight, the patrol was extracted by UNAMID reinforcements that arrived from the Mission's Khor Abeche and Manawashi sites.

Seven Tanzanian peacekeepers were killed and 17 military and police personnel, among them two female police advisers, were wounded.

Mr. Ban expressed his deepest sympathies to the families of the fallen peacekeepers, the Government of Tanzania and to all UNAMID personnel.

UNAMID Joint Special Representative Mohamed Ibn Chambas also condemned “in the strongest possible terms those responsible for this heinous attack on our peacekeepers,” and added that “the perpetrators should be on notice that they will be pursued for this crime and gross violation of international humanitarian law.”

The Security Council echoed Mr. Ban's remarks, calling on the Government of Sudan to investigate the incident and expressing deep concern at the serious nature of the attack, calling it “one of the most severe attacks on UNAMID since its deployment.”

In a statement, members of the Council underlined that any attack or threat of attack on UNAMID is unacceptable, and demanded that there be no recurrence of such attacks.

They also reiterated their full support for UNAMID and called on all parties in Darfur to cooperate fully with the Mission.

Established in July 2007, UNAMID has the protection of civilians as its core mandate. In addition, the peacekeeping operation is tasked with facilitating the delivery of humanitarian aid and assisting with an inclusive peace process in Darfur, where fighting broke out nine years ago, pitting Government forces and allied militiamen against rebel groups. 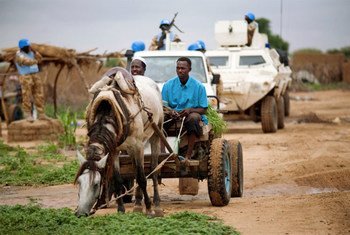 7 July 2013
A senior United Nations humanitarian official in Sudan warned today that the “heinous act” leading to the deaths of two non-governmental organization (NGO) workers in South Darfur - an urban shoot-out between Government troops and rebels – highlights the unstable security situation and threatens to disrupt the flow of relief aid to the strife-torn region.