UNHCR/B.Bannon
A displaced woman with two children after fleeing their home in southern Somalia.
12 July 2013

Despite gradual improvements in the humanitarian situation in Somalia, the needs remain immense, a senior United Nations relief official said today, calling for greater investment to break the cycle of crisis in the Horn of Africa nation.

Despite gradual improvements in the humanitarian situation in Somalia, the needs remain immense, a senior United Nations relief official said today, calling for greater investment to break the cycle of crisis in the Horn of Africa nation.

“I call on the international community to invest now to build the resilience of Somalis and stop the cycle of crisis they have endured for far too long,” John Ging, Director of Operations in the Office for the Coordination of Humanitarian Affairs (OCHA), said at the end of a two-day visit to the capital, Mogadishu, as well as neighbouring Kenya.

An estimated 1 million people in Somalia urgently require humanitarian assistance and a further 1.7 million need sustained support to avoid falling back into crisis, OCHA said in a news release.

In addition, one in seven children in Somalia is malnourished and polio has recently re-emerged after more than six years without a reported case. But the Somalia Humanitarian Appeal for 2013 is just 33 per cent funded.

While in Mogadishu, Mr. Ging also paid tribute to those that lost their lives in last month's attack on the UN Common Compound – in which UN humanitarian and development workers reside and work.

Among those killed were one international staff member, three contractors and four Somali security guards. Several Somali civilians were also wounded and killed outside the compound.

“My heart goes out to the families and friends of those who lost their lives defending UN staff courageously,” he stated after visiting the compound. “Their heroism and sacrifice will not be forgotten.”

While in the country, Mr. Ging met Somali Government officials, the leadership of the UN and the African Union Mission in Somalia (AMISOM), humanitarian partners and the donor community.

He called on all those with influence to redouble their efforts to provide a safe working environment for humanitarians and expressed his deepest respect and appreciation for the continued dedication of humanitarian aid workers in Somalia to reach all those in need, despite the risks.

“The day after the attack on the UN compound, humanitarian workers were back out there implementing an emergency vaccination campaign against polio,” said Mr. Ging. “Their commitment to ending humanitarian suffering in all areas of Somalia is unwavering.” 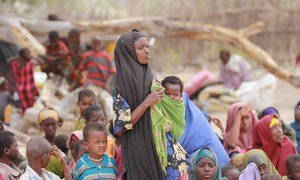 More than a quarter of a million people died in the famine in Somalia between October 2010 and April 2012, in part because the international community did not act quickly enough, the top United Nations humanitarian official in the country said today.