Global cereal production is expected to increase by 7 per cent in 2013 compared to last year, the United Nations food agency said today, but warned that in spite of a boost in supply, various regions including Central Africa, West Africa and Syria are still affected by food insecurity.

Global cereal production is expected to increase by 7 per cent in 2013 compared to last year, the United Nations food agency said today, but warned that in spite of a boost in supply, various regions including Central Africa, West Africa and Syria are still affected by food insecurity.

In its Crop Prospects and Food Situation report, the Food and Agriculture Organization (FAO) forecasts that cereal production this year will reach 2,479 million tonnes, a new record level.

Wheat, coarse grains and rice production are all expected to expand, which will help replenish global supplies of cereal and stabilize markets over the next year, the report says.

However, the report warns that many developing countries are still affected by food insecurity. In particular, the report focuses on various countries where conflict is preventing the population from satisfying their food needs.

In Syria, wheat production dropped significantly this year due to the escalating conflict in the country. The livestock sector has also been severely affected, and the report estimates that some 4 million people are facing severe food insecurity.

Conflict has also affected food security in the Central African Republic (CAR) and the Democratic Republic of the Congo (DRC).

In the Sahel, which has previously experienced famine, the overall food situation is favourable in most parts of the region, the report said, due to an above-average 2012 cereal harvest. In spite of this, a large number of people are still affected by conflict and the lingering effects of the 2011-2012 food crisis.

In Madagascar, damage caused by locusts and a cyclone is expected to reduce crop production in 2013, causing increased hunger, especially in the southern and western regions of the country.

In the Democratic People's Republic of Korea (DPRK), despite an improved cereal harvest in the 2012 season, chronic food insecurity continues, with an estimated 2.8 million vulnerable people requiring food assistance until the next harvest in October.

In total, there are 34 countries requiring external food assistance, of which 27 countries are in Africa, the report stated. 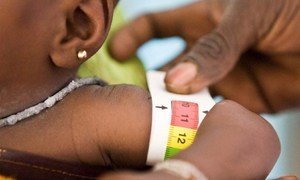 United Nations officials have welcomed the funds pledged and political agreements reached at the Nutrition for Growth summit, held today in London, as a new opportunity to ensure millions more infants and pregnant women have better diets, and to reduce cases of stunting and deaths from malnutrition.